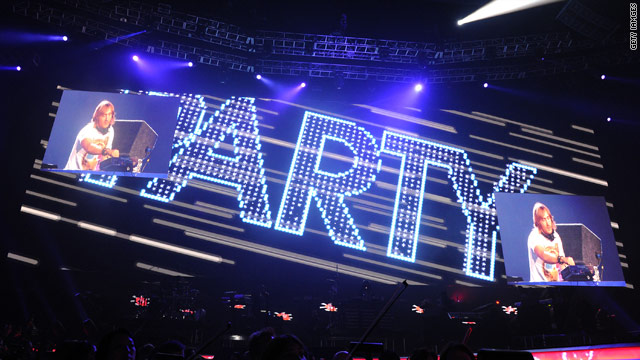 (CNN) -- Blame it on the French if you must, but 2010 may well go down as the year mainstream America went not just Europop, but "Euro-hop."

Four out of Billboard's Top 20 singles this week bear the hallmarks of an unmistakable new Eurodance-meets-urban sound that is all but taking over Top 40 and urban radio.

It's a club-influenced soundtrack for teens and 20-somethings filled with sparkling synth hooks and throbbing beats more Berlin than Baltimore, yet Middle America can't get enough.

"It's absolutely unbelievable," said Paris-based DJ and producer David Guetta via phone late last month. "When I started this, I could never imagine that one day this sound would become a new format in America."

Guetta, whose collaboration with Flo Rida ("Club Can't Handle Me ") is currently No. 12 on Billboard's Hot 100 chart, is arguably the leader of a new Euro-hop sound that pairs American rappers with European-style house music.

"My goal was to create a bridge between European DJ culture and American urban culture," he said. "When we did 'I Got a Feeling' [his chart-topping mega-hit with the Black Eyed Peas] and it became bigger than we ever thought, I thought it's really crazy and I never could have imagined that it was gonna be that way in America."

The Frenchman said the reason Americans are embracing Euro-style beats over more traditional R&B rhythms or hardcore rap sounds that were popular on radio just three years ago is because the fresh fusion "is the best of both worlds."

The formula has certainly worked for Guetta and his collaborators such as Akon recently (the two topped the charts worldwide in 2009 with "Sexy B*tch" and Guetta had another huge crossover smash with his "Memories" this year).

But Guetta is far from the only across-the-Atlantic producer pushing a European sound for Americans who seemingly can't get enough club music wrapped in a pop package.

The trend has been building for years in the United States, with everyone from Britney Spears to Madonna turning to Europe and Scandinavia for inspiration (and songs). Earlier this year, producer J.R. Rotem and Minneapolis-born rapper/singer Auburn had a minor hit with a version of German Eurodance act ATC's decade-old track "Around the World (LaLaLaLaLa)."

Today, this new urban Euro-inspired sound is bigger than ever.

Norwegian producers/songwriting duo Stargate know a thing or two about radio hits -- they penned Beyonce's "Irreplaceable" and top-selling tracks for Ne-Yo -- and lately they are turning to European hooks for inspiration.

"There's been a huge change in America," said Hermansen from his studio in New York last month. "When we were working with Ne-Yo and Beyonce just a few years ago, things were different. ... There's been a shift in tempo, sound and style and I guess you can say we've been a part of that, but it's also happened because the taste of the public has changed over the past two years."

According to Hermansen, younger Americans are embracing European-style music because it sounds fresh.

"Every generation needs to have their own sound," he said. "If you're a 15-year-old today you don't want to listen to the same thing that a 15-year-old listened to five years ago."

Eurodance ruled the airwaves in the 1980s and early 1990s, when acts like Germany's Snap! stormed the upper echelons of U.S. pop charts with hits such as "The Power" and "Rhythm Is A Dancer."

But teens today are more likely to prefer a fusion of Euro styles wrapped in an authentically American package.

"What we are trying to do is to combine elements from European club music with a real song, urban sounds and interesting lyrics that will hold up in America," Hermansen said.

"Hip-hop came from the underground and became the new pop music. The same thing is happening with dance music now, and it's actually changing hip-hop to create a new hip-hop pop sound."

And while many music fans bemoan artists such as Usher "going Europop," consumers are voting the music up via iTunes downloads and CDs sold.

For better or worse, more "Euro-hop" is almost certainly on the way.