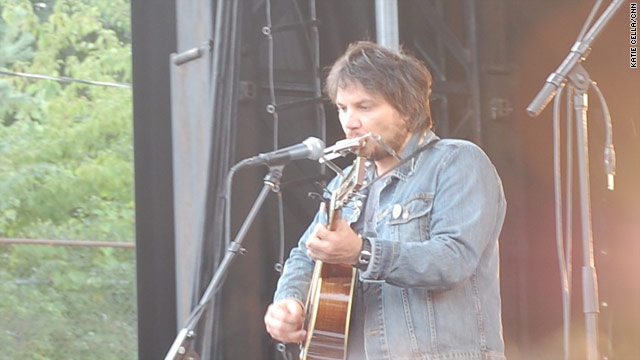 North Adams, Massachusetts (CNN) -- The Chicago rock band Wilco took over the Massachusetts Museum of Contemporary Art from Friday, August 13, through the weekend to throw the first Solid Sound Festival, a celebration of art, music, comedy, film, and community.

The museum opened its doors in 1999 in North Adams, Massachusetts, a town of less than 14,000 people nestled in the hills of northern Berkshire County. The museum took over an elaborate system of buildings, 26 total, originally built as a textile mill in the late 19th century.

The Sprague Electric Company occupied the space from the 1920s until 1985, and when the company's closure left thousands unemployed, the town's business and political leaders saw a rare opportunity to use the vast site in a creative way. Several million dollars and 14 years later, the old mill opened its doors as America's largest center for contemporary visual and performing arts.

In the 11 years since the museum has been open, it has revitalized the town of North Adams. The downtown has been completely renovated and is now one of New England's premiere cultural destinations.

The news of Wilco's intentions came as a big surprise to North Adams natives.

But the group's lead singer, Jeff Tweedy, said the space made perfect sense for the festival, which included art, comedy and film. "We kind of think of Wilco as a collective," Tweedy said.

The band, comprised of six eclectic members including singer/guitarist Tweedy, guitarist Nels Cline, bassist John Stirratt, drummer Glenn Kotche, and multi-instrumentalists Pat Sansone and Mikael Jorgensen, was looking for a place to hold a large music festival when they decided the museum would be perfect. "It takes the pressure off when it's a world-class destination you're having your festival at," said Stirratt.

In addition to Wilco, each member of the band performed with his own musical side project. They also selected 10 other musical acts, including locals The Books and soul legend Mavis Staple. Cline, Kotche and Sansone prepared their own art exhibits for display, and selected exhibits from many other artists. The galleries showcased a Sol LeWitt retrospective, consisting of wall-sized structures that expanded over three floors of the museum. Wilco also curated a film series and invited four well known New York-based comedians -- Kristen Schaal, Hannibal Buress, John Mulaney and Todd Barry -- to perform on Saturday.

The result was an expansive multimedia event that attracted about 5,000 people on Saturday from all corners of the country.

John Masino, who made the 5½ hour trip from Philadelphia, Pennsylvania, said, "It was really cheap to see Wilco, plus Tweedy, plus some awesome bands that are kind of under the radar. Plus, we're big comedy fans, so we saw all the comedians yesterday. Literally 90 bucks for all that for a weekend."

After Staples' rousing set Saturday evening, the headliners took the stage at Joe's Field, situated in the back of the complex. The band opened its 2½ hour set with "Wilco (The Song)," and played a variety of songs spanning its 16 year history against a backdrop of Berkshire hills.

The museum had hundreds of volunteers and employees making sure the festival ran smoothly. There was nary a long line in sight, as the large location provided plenty of room for attendees of every age to spread out and explore the various exhibits.

Local businesses provided food and other services, and local restaurants were turning over tables at warp speed. All the hotels in northern Berkshire County and southern Vermont were booked months in advance. It was obvious from day one that the festival was a resounding success for the area.

On Sunday, about 3,500 people returned to experience the last day of the festival. There were performances by Chicago's Deep Blue Organ Trio, Detroit's Outrageous Cherry, Stirratt and Sansone's band The Autumn Defense, Cline's instrumental guitar trio The Nels Cline Singers, L.A.'s Avi Buffalo, and a final performance by "Jeff Tweedy Solo Plus" on Joe's Field.

During this final performance, Tweedy told the crowd, "I hope we can come back next year. Come back, bring some friends. Or don't. There are plenty of people here, we don't need anymore. Keep it a secret." Sorry Jeff, but the secret's out.