The confusing legacy of Michael Jackson 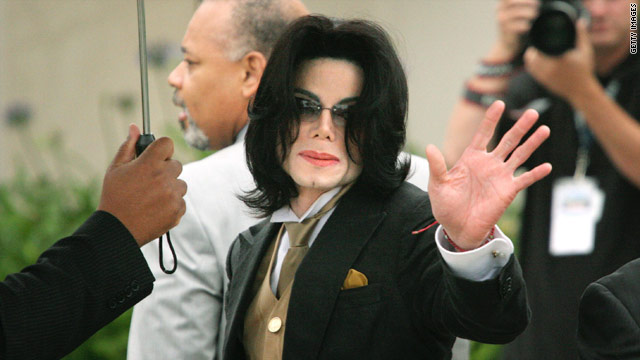 Michael Jackson, seen here in 2005, remains a mystery a year after his death.
STORY HIGHLIGHTS

"Michael wanted his legacy to be for people to understand the plight of children, the pain of childhood neglect," says Rabbi Shmuley Boteach, who was a Jackson spiritual adviser until the pop star ended their relationship in 2001. He observes that the guardians of Jackson's assets want the estate to "remain as lucrative as possible," and any devotion to Jackson's most heartfelt causes hasn't materialized. "That part of his legacy has been lost completely," he says ruefully.

The pop star, who died a year ago Friday, was "a groundbreaking artist, a complete package in a way the Beatles and Elvis never were," says Ashley Dos Santos, a pop culture and marketing expert for the public relations firm Crosby-Volmer International. She ticks off his successes -- spectacular showman, music video pioneer -- and is confident a Jackson shrine, like Presley's Graceland, will eventually come to pass, with his legacy in the joy of his music and performances.

In life, Michael Jackson was whoever you wanted him to be: Humanitarian. Media-savvy artist. King of Pop. Or: Accused child molester. Has-been. World-class freak.

No wonder his legacy is so confusing. Is it about compassion? Talent? Money? Or the dark circus that kept intruding on it all?

"I think that when you're talking about Michael Jackson and you try to analyze him, it's like analyzing electricity, you know? It exists, but you don't have a clue as to how it works," Jackson biographer J. Randy Taraborelli told CNN.

A year after his death, there is little in the way of commemoration, outside of some media specials (including a CNN documentary, "Michael Jackson: His Final Days," that airs Friday).

Perhaps there are still too many things to work out. Neverland is still in limbo, family relationships are still strained and the case concerning Jackson doctor Conrad Murray still in the works.

And perhaps Michael Jackson remains too complex. "Do I contradict myself? / Very well then I contradict myself / (I am large, I contain multitudes)," wrote Walt Whitman in "Song of Myself," and Jackson fulfilled that passage in spades.

Boteach, who admittedly feels disappointed by the loss of Jackson's friendship, is still upset that the pop star didn't push harder for things bigger than himself. He observes that John Lennon, despite an open-book life that included divorce, avowed cynicism and various rock-star excesses, is today remembered for his hopes for peace and memorialized in a bucolic chip of New York's Central Park called Strawberry Fields.

"That's a successful life," says Boteach. "We understood that in addition to being very fallible, he had these beautiful ideals we could all buy into and salute."

Jackson had those ideals as well, Boteach adds, but he became focused on getting back on top toward the end of his life -- focused on money, fame and material things.

"All of us make mistakes, all of us are fallible, but there's a right way to live your life -- the right way for a superstar to live his life is to be like Bono," he says. "Just do things for other people. It's that simple."

But it's obvious that Jackson, despite the messiness of his later life, touched people.

Dos Santos observes that people flew thousands of miles just to stand outside July's memorial service at Los Angeles' Staples Center. "That speaks to the level of forgiveness and willingness to forget a lot of the controversy that surrounded him," she says. "He spoke to the heart of his fans in a way that I don't think we've ever seen before or since."

One reason he reached so many, says University of Rochester music professor John Covach, was because of his ability to overcome genre boundaries. The Jackson 5 appealed to teenyboppers and Motown enthusiasts; Jackson's solo work, particularly on the albums "Off the Wall" and "Thriller," couldn't be pigeonholed as R&B.

And then there were his performances, whether on MTV, which became a force partly through Jackson's videos, or live.

"Jackson used his success to really raise the whole level, not only of music videos, but of concert productions -- almost like taking a Broadway show on the road," Covach says.

All this has had a positive effect on another kind of legacy: the bottom line.

After Jackson's death, sales of his albums went through the roof. He'll continue to be a valuable property, says Joe Maddalena, president of the collectibles firm Profiles in History, who observes the handwritten lyrics for "Beat It" recently sold for $27,500, about five times what Maddalena estimates they would have gone for before Jackson's death. He believes other Jackson paraphernalia, such as stage outfits, will also do well.

And a little notoriety won't hurt, he adds. After all, celebrities such as Marilyn Monroe, Jim Morrison and Elvis Presley are huge draws, despite their flaws.

In fact, Elvis might be the most apt comparison to Jackson. Toward the end of his life, Presley -- overweight, drug-addicted, a shadow of his former, groundbreaking self -- was a figure of mockery. After his death, however, the mocked Elvis receded, replaced by the vibrant, virile figure of the '50s and '60s.

Jackson's legacy has undergone the same transformation, and that will continue, says "Inside Edition" chief correspondent and former CNN anchor Jim Moret.

"Prior to Michael Jackson's death, and for the years since the criminal case, Michael Jackson was, in many was, a broken man," Moret told CNN. "And he was the butt of jokes, he was the punch line for comedians, and he was thought of as a has-been, in some ways.

"This death has catapulted him to the status of Elvis, in that he's now a legend. And he was probably worthy of that status even in life. But all of the aspects of his life that were questionable when he was alive, have almost been dismissed in his death."

Will that be enough? Will the messy life of Michael Jackson be smoothed out to a simple story of a charismatic boy-man?

"It's going to take us time to put it into perspective," he says. "It's gonna take many years I think for us to really understand the impact that Michael Jackson has had on us. Because it's not a simple story, you know?"