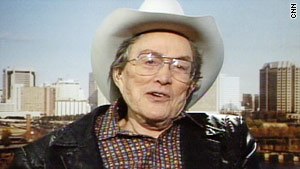 Jimmy Dean is best known for his song "Big Bad John." He was inducted into the Country Music Hall of Fame this year.
STORY HIGHLIGHTS

Dean, a member of the Country Music Hall of Fame, was with his wife, Donna, at the time of his death, which appears to be from natural causes, said R.J. Clark of the Henrico County Police department.

Musically, Dean is best known for his song "Big Bad John," which made it to No. 1 on both the country and pop charts in 1961 and was honored with a Grammy. His narrative style of song also produced hits like "Little Black Book" and "P.T. 109" -- a song about John F. Kennedy's command in the South Pacific during World War II.

Starting in 1963, he hosted a successful variety show on ABC called "The Jimmy Dean Show," which ran for three years. Regulars on the program included Roger Miller and puppeteer Jim Henson, making Rowlf -- a piano-playing dog -- an early Muppet favorite.

Video: Jimmy Dean: 'I believe in me'
RELATED TOPICS

At about the same time, Dean started the Jimmy Dean Meat Company. Dean eventually sold his meat company to Sara Lee Foods in 1984, but remained its chairman and TV spokesman, which kept him in the public eye until recent years.

Dean was born Seth Ward in Olton, Texas, on August 10, 1928. His mom taught him piano starting at age 10, but he also learned how to play the guitar, harmonica, and accordion.

After his discharge from the Air Force in 1948 he put together a band called the Texas Wildcats and played in the Washington, D.C., area

"We played every dive in Washington at one time or another," Dean said in his biography on the Country Music Hall of Fame website. "And dives is what they were."

Dean was inducted into the Country Music Hall of Fame this year.