Alicia Keys is expecting a baby 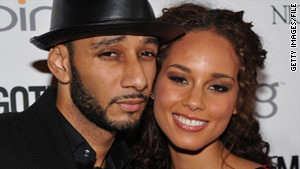 Los Angeles, California (CNN) -- Alicia Keys has 12 Grammys under her belt and now she has something else under there, too.

The 29-year-old R&B singer is pregnant with her first child, her representatives confirmed.

They would not say when the child is due.

Weeks of photos have shown Keys noticeably fuller in the mid-section and sporting a collection of loose-fitting black tops.

The couple is engaged to be married in a private ceremony later this year.

Swizz Beatz, 31, -- whose real name is Kasseem Dean -- has one son from his marriage to Mashonda Tifrere. He also has a second son from a previous relationship.

Swizz Beatz and Keys have been friends for several years and worked together on one song for her current album, "The Element of Freedom," the publicist said.

"They're very happy," a source close to the couple said.