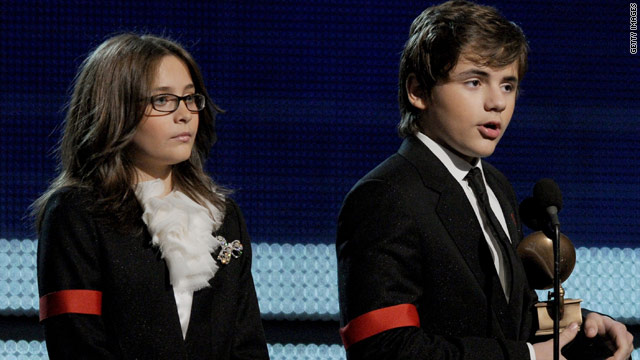 Los Angeles, California (CNN) -- The most memorable moment of the 52nd annual Grammy Awards on Sunday may be the onstage appearance of Michael Jackson's two eldest children to accept their father's lifetime achievement award.

"To all his songs, his message was simple, love," 12-year-old Prince Michael said. "We will continue to spread his message and help the world."

With a voice that sounded more mature than his age, he then thanked "God for watching over us these last seven months and our grandma and grandpa for their love and support."

Paris, 11, then spoke: "Daddy was supposed to be here. Daddy was going to perform last year. Thank you. We love you Daddy."

Prince Michael and Paris, along with several cousins, wore black suits with red stripes on their pants, and red armbands.

The children appeared after a rousing performance of Michael Jackson's "Earth Song," with a recording of Jackson accompanied by live performances from Celine Dion, Usher, Carrie Underwood, Smokey Robinson and Jennifer Hudson.

Grammy producers used the head-to-head competition between Beyonce and Taylor Swift to lure viewers to stay tuned through the three-and-a-half hour telecast.

Swift got the biggest Grammy of the night, album of the year, for "Fearless."

"I just hope that you know how much this means to me," she said in her acceptance speech. "Our families are freaking out in their living rooms."

Beyonce won a pair of Grammys over Swift, including for best female pop vocal performance.

Beyonce carried home six Grammys, including one in the major category of song of the year. That honor, a songwriters' award, was given to Beyonce for co-writing "Single Ladies (Put a Ring on It)."

For the best female pop honor, won for "Halo," the nervous singer thanked her family, "including my husband -- I love you." Beyonce is married to hip-hop star Jay-Z.

Alternative rock band Kings of Leon upset favorites Beyonce and Swift to win the record of the year Grammy for "Use Somebody."

The win gave the Kings of Leon three Grammys out of four nominations this year, all thanks to last year's "Only by the Night" album. The same album gave them three nominations last year, one of which they won.

"Use Somebody" lost out earlier in the show to Beyonce's "Single Ladies" for song of the year.

"The best thing about winning Grammys is really it's the first time our family gets to see the success we're having," Kings lead singer Caleb Followill said backstage. "We're getting my mom wasted."

What do you think about the Grammys?

Other triple Grammy winners were The Black Eyed Peas and Jay-Z.

The Zac Brown Band won best new artist. Lady Gaga, considered by many to be this year's biggest breakout act, was ruled ineligible because she had a song released and nominated last year.

Lady Gaga, whose performance opened the show, won two Grammys presented in the pre-telecast. Her single "Poker Face" beat out songs by the Black Eyed Peas, Madonna and Britney Spears in the best dance recording category. Her CD "The Fame" also won a Grammy for best electronic/dance.


CNN's KJ Matthews and David Daniels contributed to this report.