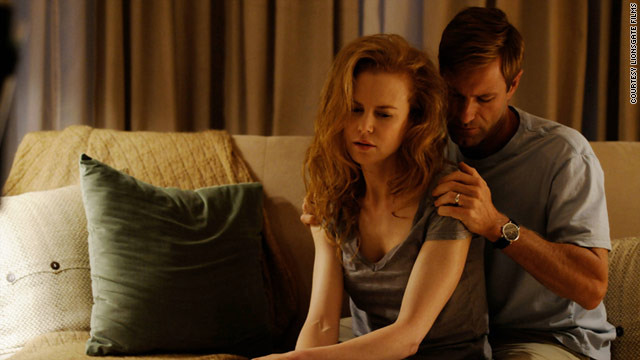 Nicole Kidman and Aaron Eckhart star as a couple who must grapple with the loss of their child.
STORY HIGHLIGHTS
RELATED TOPICS

(CNN) -- Sometimes things happen in life that knock you right off the path you had mapped out for yourself and send you reeling.

It's only when you're outside in the dark that you look back and see that the safety zone you always took for granted wasn't a safe zone at all -- just a temporary reprieve from disaster. At least, that's how it appears from that vantage point. Then the question arises: how to get back in? How to recover from an irreparable loss?

This is where Becca and Howie Corbett find themselves -- still outside looking in -- a year after their 4-year-old was struck and killed by a passing car. The accident wasn't anybody's fault; it was everybody's fault. They don't blame each other; they both blame themselves.

Their marriage has grown thorns. It's raw, abrasive and hurts so much they can barely find the energy to maintain a truce behind closed doors. But then the alternative is even more painful, too disturbing to contemplate.

David Lindsay-Abaire's Tony- and Pulitzer-winning play forces us to think about a scenario no parent wants to imagine. It comes to the screen through the patronage of Nicole Kidman, who gets a producer credit here as well as one of those rare movie roles that can draw her out of her shell.

Kidman is an intriguing case, a star who can seem trapped beneath her brittle porcelain beauty, but who has also ventured further and wider than most, taking on risky, uncommercial projects like "Dogville," "Birth" and the Diane Arbus movie, "Fur." The last time she found a role this layered it was the monstrous writer in "Margot at the Wedding", a part she played so ruthlessly audiences practically ran screaming for the exits.

This time, at least, she can be sure of engaging our sympathies, even if the material is too depressing to bring in large crowds.

Becca's actions can be cruel. She's cold with Howie (Aaron Eckhart -- also excellent), can't disguise her contempt for group therapy (she quits before they throw her out), and she mortifies her husband when she gives away their son's wardrobe without a word of warning. She keeps her emotions locked tight. But unlike Howie, we can see what it costs her, having those clothes in the house.

When she starts stalking the teenager who killed her boy (Miles Teller), we have no way of knowing which way she'll jump -- it's an irrational urge that Kidman makes utterly and immediately human.

The director is John Cameron Mitchell, a filmmaker previously known for the assertively camp "Hedwig and the Angry Inch" and the bohemian rhapsody, "Shortbus."

"Rabbit Hole" is a complete about-face, a modest, restrained, introspective piece, so self-effacing you wonder if it might be the work of some other John Cameron Mitchell -- his boring, straight father, perhaps?

It's not all roses. I never believed Kidman's polished Becca was related by blood to Dianne Wiest or Tammy Blanchard (as her embarrassing mother and screw-up sister, respectively), and though the relationship between Becca and the teenager develops with delicacy and tact, it still feels a bit precious and stagy.

Much better is the heartrending, tragic-comic scene when Eckhart's Howie takes it upon himself to show the house to prospective buyers, only to fall apart when they come to the nursery. In a handful of moments like this, the irreproachably compassionate "Rabbit Hole" isn't just well written and beautifully acted, it's simply devastating.