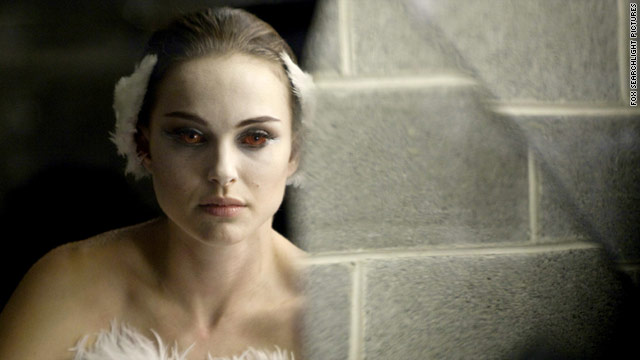 Natalie Portman stars as Nina, a ballet dancer on a journey of self-exploration in the film "Black Swan."
STORY HIGHLIGHTS

The Swan Queen is an idealized image of feminine purity, high art's version of Snow White or Cinderella. Of course it's an illusion, an image it takes years of hard work and discipline to carry off on stage -- and if you ever wondered what the price might be for that kind of dedication, get a load of Darren Aronofsky's new film: a dementedly lurid psychological horror movie in white tutus and leg warmers.

Natalie Portman is Nina, a dedicated dancer whose consummate technique makes her the obvious candidate to replace the retiring prima ballerina in the forthcoming production of "Swan Lake." The company's artistic director, Thomas Leroy (Vincent Cassel), respects Nina's quality, but worries that she is all technique, no fire. She hasn't really experienced life, and it shows in her dancing -- or so he says.

What he means by that ... well, he asks her outright: Is she a virgin? She recoils from the question, but she's not so outraged that she doesn't wonder if he's interested in her on something other than a professional basis. Not that the boundaries can be defined so easily. Any great director knows the art of seduction and she suspects he may be right: She's given her life to ballet, but she's never gone out on a limb.

She lives at home with her mom (Barbara Hershey), and she has never been tempted by drink or drugs or men. It takes Leroy, and a new putative rival -- the ambiguously fiendish and/or friendly Lily (Mila Kunis) -- to open up those trap doors in her psyche.

Does a director have any business delving into an actor's personal life? Leroy might counter that is his business, and so might Aronofsky. Case in point: Mickey Rourke did terrific work in "The Wrestler," but without 15 years of failure under his belt it wouldn't have been half the movie.

A studious, mature presence since her earliest films, Natalie Portman has something of the goody two-shoes about her, an image this movie might help her shake.

iReport: Portman on the red carpet

As Nina explores her dark side and her sense of reality fragments, Portman reveals a more open and vulnerable actress than she has shown before. It's a risky, intensely physical performance that deserves Oscar consideration, albeit embellished and enriched by brilliant CGI effects and Aronofsky's phantasmagorical imagination.

In another piquant casting coup, Winona Ryder is the angry ex prima ballerina, yesterday's girl cruelly dispatched to the sidelines as soon as Leroy determines she is past her prime.

Kunis is an insidious thorn in Nina's flesh, her opposite in all things: warm and loose, sexy and free. And also, maybe, fatally insincere.

The dances are visceral, handheld. We might be back on the canvas ring from "The Wrestler" -- you can practically hear the tendons pop. Nina's skin blisters and burns, but is it psychosomatic, or is it a hallucination?

A stylistic magpie, Aronofsky takes what he wants from Roman Polanski's classic psychological nightmare movie "Repulsion" (a lot); along with bits and pieces from "The Red Shoes" and "The Piano Teacher," not forgetting Pyotr Ilyich Tchaikovsky, who contributes a big chunk to Clint Mansell's score.

The melodrama is so overheated it sizzles and smokes and it's a wonder it doesn't spontaneously self-combust. It's the kind of chick flick guys are going to love (yes, there's even a little girl-on-girl action). Never mind the quality, feel the heat.