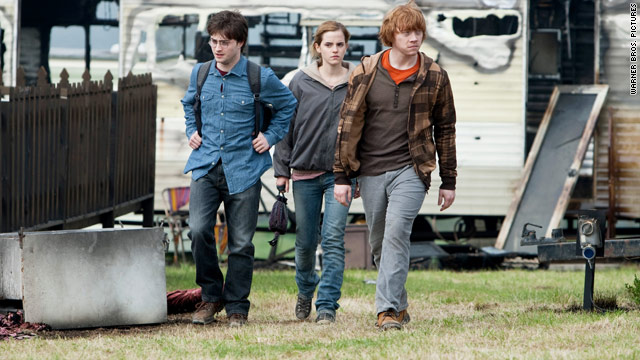 Harry Potter and the gang are back for the next-to-the-last installment of the franchise.
STORY HIGHLIGHTS

Not a close shave -- he's had more than enough of those to last him several lifetimes -- but a shave all the same. He's at that age now (Daniel Radcliffe, who plays him, is 21) where the upper lip is just beginning to wisp. He's more assertive than he used to be, more authoritative, though not necessarily more confident. The prospect of going mano-a-mano with his arch nemesis, the spectral Lord Voldemort (Ralph Fiennes), has had him on the run for the last two movies.

To even up the score, Harry is plodding around Britain, searching for horcruxes -- everyday items (a book; a locket) in which Voldemort has stashed away a part of his soul as an insurance policy against mortality. If Harry can't locate and destroy each horcrux, he has no chance of defeating Voldemort.

You probably know all this already -- and if you don't, you surely don't care. The movie, number seven in a series of eight, assumes as much.

You will also know, I'm sure, that the last book has been split into two films, apparently to do full justice to J.K. Rowling's narrative complexity. And if such fidelity comes with a bonus box office bonanza for Warner Bros., the studio can hardly be blamed for pouring on the gravy (the finale is due next summer).

Only a grouch -- or a critic -- would complain that there isn't much of a movie here. I mean, how many horcruxes would you expect a wizard ("the chosen one", no less) to find over the course of 146 minutes? More than just the one, surely?

Directed again by David Yates (who also directed the previous two films), "Deathly Hallows Part 1" races out of the traps with an exciting broom chase through the night skies involving Harry and half a dozen doppelgangers.

There are more makeovers when Harry, Hermione and Ron infiltrate the Ministry of Magic in the guise of civil servants -- a too-rare comic touch -- eventually making off with a locket that bears an uncanny resemblance to a certain ring from another famous fantasy series.

Perhaps contaminated by this toxic talisman, the penultimate Potter is dark and morbid, and also rather gray and glum. The camaraderie of Hogwarts is a distant memory. Even Ron and Harry squabble and go their separate ways. One faculty member is hung upside down in the air -- a torture tactic of nasty imagination -- then fed to a giant serpent for dinner. (Fiennes delivers that particular invitation with such exquisite finesse he'll probably be doomed to play villains for perpetuity.)

iReport: Your reviews of "Harry Potter"

But the film's jerky hide-and-seek structure feels like a rut, as repetitive as Harry's numbing near-death experiences and Hermione and Ron's still-nascent romance. Rowling has fashioned a cliffhanger, but Yates never takes us up to the edge.