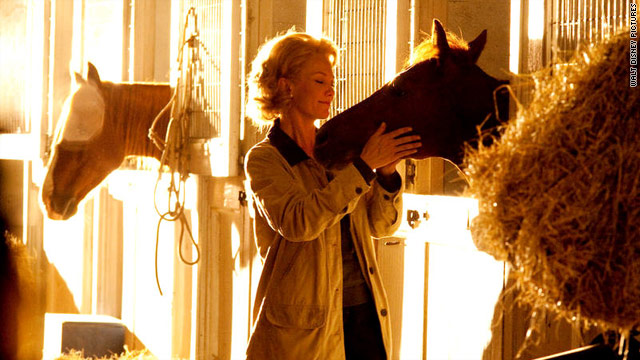 (EW.com) -- Moviegoers have grown increasingly intense about avoiding ''spoilers'' (probably because of all the information that spills out of the Internet.)

In that light, "Secretariat," a benignly inspirational Disney sports drama about the legendary racehorse who won the Triple Crown in 1973, offers a fascinating test case for how much spoilers sometimes don't matter.

Going into the movie, we absolutely know that Secretariat, the chestnut Thoroughbred who galloped to triumph through a rare combination of total speed and maximum stamina, will win his three big races (the first time a horse had done so in 25 years.)

Yet there he is, in his famous blue-and-white blinker hood, pounding the track at the Kentucky Derby, starting way in the back (as was his style), then overtaking one horse after another, the camera following right on his hooves.

And damned if, at that moment, we aren't as excited as children, our hearts in our throats as he thunders to victory, almost as if we had no idea what was coming.

When Secretariat is running his races, the movie has a hokey, old-fashioned appeal. It uses a fantastic gospel anthem to stoke our feelings, the Edwin Hawkins Singers' 1969 rendition of ''Oh Happy Day.'' And that song, with its funky-sublime syncopation, its waves of lordly joy, makes us feel that, yes, Secretariat really was a miracle horse, a competitor graced by Someone Up There.

Off the racetrack, however, "Secretariat" is a sketchy and rather innocuously upbeat movie. The director, Randall Wallace ("We Were Soldiers,") often seems to be aiming for the same Christian demographic that helped make a hit out of "The Blind Side."

I personally have no objection to a horse film that views a creature as magnificent as Secretariat with religious awe, but in this case the uplift has a downside. The film is so insistently square it undercuts the very drama it's out to capture.

The central figure, Penny Chenery (Diane Lane), is a housewife who knew nothing about running a horse farm when she took over the management of her ailing father's Meadow Stables in Virginia. Penny wins Secretariat in a coin toss (though the film suggests it's her womanly vantage that leads her to foresee how the horse's bloodlines will give him racing strength.)

It's a pleasure to see her take charge, fighting her way up in a racehorse world thick with the corruptions of men. Lane, wearing Pat Nixon's hair, makes Penny devoutly traditional but never prim; it doesn't scare her that she's in over her head.

She recruits the eccentric trainer Lucien Laurin, played by John Malkovich, and the actor, wearing crazy hats and spouting French whenever he gets angry, makes us feel his horse fervor.

Penny's obsession remains flawless, noble, benevolent. The only real drama is that (spoiler!) Secretariat occasionally loses. As long as he's winning, though, this pleasantly rote movie will rouse you. B-

See the full article on EW.com.