'Inception': The stuff that dreams are made of 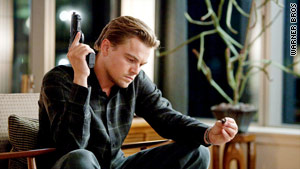 Leonardo DiCaprio plays an "excavator" fighting demons of his own in "Inception."
STORY HIGHLIGHTS

(CNN) -- "I hate my dreams. They're so ... infantile." Heaven knows what artist Laurie Anderson would make of Christopher Nolan's first film since "The Dark Knight," but if audiences don't go for it, we're more likely to hear a different complaint: It's just too darned complex.

A spectacular fantasy thriller based on Nolan's own original screenplay, "Inception" is the smartest CGI head-trip since "The Matrix." The premise is so out-there, it requires not just a leap of faith but also too much screen time to explain, so do yourself a favor and pay attention.

Leonardo DiCaprio is Cobb, an "excavator," who digs around in people's subconscious while they're catching some zzzzs. This act of infiltration is "not strictly legal"; the motive is not therapeutic but espionage and theft.

It's also not a solo operation. To do the job properly requires an "architect," basically someone to design an appropriate dreamscape, something vivid and detailed enough to keep the dreamer's defenses down. Depending on the complexity of the project, it might also require a "burglar," a "chemist" and preferably someone on the outside to administer a well-timed wake up call.

Cobb's partners include Arthur (Joseph Gordon-Levitt); a newbie, Ariadne (Ellen Page); Yusuf (Dileep Rao); and Eames (Tom Hardy). Their client, Saito (Ken Watanabe), wants more than access to a rival industrialist's grey matter; he requires Cobb to plant an idea in there that will dismantle an entire conglomerate.

As if that weren't hard enough, Cobb is also plagued with keeping his own demons at bay, in the form of an angry dead wife (Marion Cotillard). DiCaprio evidently hasn't got "Shutter Island" out of his system yet.

Video: Film goes inside your dreams

A kind of meta-heist movie, "Inception" evokes Philip K. Dick's cerebral sci-fi, the exploration of alternate states of consciousness, memory and fantasy. But these are also Nolan's themes, familiar from the amnesiac noir of "Memento" and the many, varied mind-games practiced by the warring magicians in "The Prestige" as well as the psychological warfare between Batman and his adversaries (fans of that series will recognize several familiar faces popping up here).

"An idea is like a virus," says Cobb, and that idea too might have been born in Gotham City or in the rabid enthusiasm that greeted "The Dark Knight."

Like "Memento" and "The Prestige," "Inception" is constructed as a box of tricks. Ariadne (who helped Theseus slay the minotaur in Greek mythology) devises labyrinths that are also escape hatches, and that metaphor of the maze runs through "Inception," which is itself a puzzle to be navigated by filmmaker and audience alike.

In the course of probing his subject's subconscious, Cobb escorts him into a dream-within-a-dream-within-a-dream. If it's a little disappointing that each level plays out as a straight-up action thriller (this guy really should get out more), the rules of this game are delightfully devious.

He has a tendency to over-complicate, but nobody bends time more ingeniously than Nolan. Three minutes in one dream might correspond to an hour in the next, and both transpire in a matter of seconds up in the real world. Gloriously, real world physics are refracted in the dream zones -- gravity just drops out like a faulty signal -- and if the dreamer starts to stir, the universe crumbles. (The Big One: the ultimate Angeleno nightmare.)

It certainly hasn't escaped Nolan's attention that this dream life functions as a metaphor for the movies. Ariadne is a production designer, Cobb an actor-director. Extras in the dream -- ordinary passers-by -- are known as "projections," and they become hostile if they suspect that someone is messing with their reality.

"Inception" only dabbles in the art of perception. For all its layering, the movie's depth remains on the surface. But with its grand, clanging Hans Zimmer score, its immense, dazzling effects and audacious storytelling, it's the summer's best bet to bust the blocks.