The summer of 'blah' blockbusters 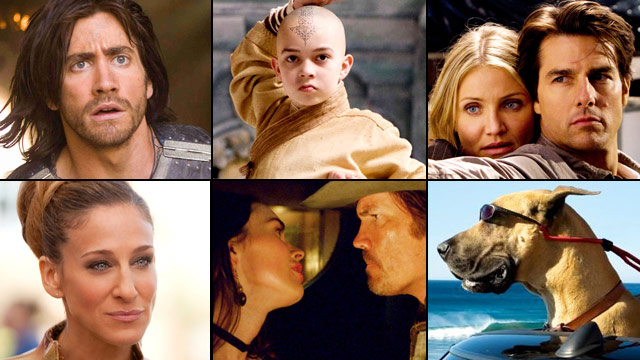 A number of this summer's movies have failed to ignite buzz, even if the box office has been decent -- which, often, it hasn't.
STORY HIGHLIGHTS

(CNN) -- Sarah Linn was practically at the end of her tether.

She'd been to see "Sex and the City 2." She went to "Jonah Hex." She even saw "Marmaduke," which made her wonder how many actors were hard up for their mortgages.

So, last weekend, the entertainment writer headlined an entry in her blog, "Summer movies suck, so far."

"It has just been an abysmal summer for movies," she said. "It's been awful. The theaters have been inundated with sequels and remakes and reboots -- and the original movies haven't been much better, either."

The San Luis Obispo, California, Tribune writer and blogger is not alone in her opinion. Despite the usual mountains of cash, rumble of explosions and terabytes of CGI that have gone into this summer's movies, it's been a strangely stagnant season, based on both box office take and reviews. Critics haven't been impressed, sure -- they rarely are by summer movies -- but neither have industry observers and some viewers.

"There were a lot more movies to choose from [last year] that were good that you could watch the whole summer. This summer, not so much," said Southern California-based iReporter Ryan Basilio, who said he goes to the movies "two or three times a week." Last weekend's "The Last Airbender" was a particular disappointment, he said, but even among the movies he's liked, the only one he's gone to more than once is "Toy Story 3."

Video: The return of 'Sex and the City'

Summer box office revenues depend on repeat business, and the numbers bear out Basilio's dissatisfaction. A handful of pictures met or exceeded expectations -- "Iron Man 2," "The Karate Kid," "Toy Story 3" and, of course, "Eclipse." But many have fallen well short, including "Sex and the City 2," "Jonah Hex," "Robin Hood" and "Prince of Persia: The Sands of Time."

Paul Dergarabedian, who crunches numbers as president of the box office division of Hollywood.com, calls the summer of 2010 "a roller-coaster ride." If it weren't for the recent surge featuring "Toy Story" and "Eclipse," "[the business] would be in a tough spot," he said.

"We were down for the summer on attendance by about 10 percent [over last year] just two weeks ago," he said. That's improved -- attendance is now down 5 percent -- and revenues are now slightly ahead of last year. But there's no ignoring the downturn, he said.

But make no mistake -- critics are uninspired. Both box office successes and failures have received terrible reviews. "Airbender" pulled just 8 percent positive notices, according to the review aggregator RottenTomatoes.com; "Eclipse" earned 53 percent. "Knight & Day" (53 percent), "Prince of Persia" (37 percent) and "Sex and the City 2" (16 percent) did poorly as well.

"This almost feels like the end of a cycle of dumbing down the movies to the point where you really can't dumb them down much more," said film critic Marshall Fine, who publishes his reviews and observations at HollywoodandFine.com. "This is what we're going to be getting for awhile until somebody accidentally makes a smart summer movie again and makes money doing it, and that inspires other studios to follow suit."

Not even the independents have been immune to the malaise. With multiplexes full of big studio offerings, smaller films have struggled to find distribution even as the big boys have faltered. (One exception: "Cyrus," which crept into the box-office top 10 last weekend despite being in just 77 theaters.)

"The thing that has got to change is the tyranny of the opening box-office weekend phenomenon," said Lars Trodson, co-founder of the indie production company Roundtable Pictures. "That's hard enough, when you're looking for the first weekend or first two weekends to make your money back, which a small independent film really isn't going to do."

But as a summer movie fan, Trodson is also disappointed in the slapdash quality of some of this year's offerings. He singles out "Grown Ups" as an example.

"It was really badly made, and it seemed as though the actors in it -- and certainly the actresses -- barely decided to show up," he said. "It seemed that some of the scenes had literally been made up on the spot. That kind of movie is the beneficiary of [the fact that] Americans will go to the movies in the summertime. It's kind of like an elaborate screen-saver, almost."

The summer is only half over, of course, so there's still hope for salvation. Fine hopes "Toy Story" continues to shine; he ranks it as one of the best films of the year, period. Linn and Trodson have high expectations for "Inception," the new film by Christopher Nolan ("Memento," "The Dark Knight"), which stars Leonardo DiCaprio and opens July 16. And Linn is also looking forward to "Scott Pilgrim vs. the World," the latest from "Hot Fuzz" and "Shaun of the Dead" director Edgar Wright. It opens August 13.

All enjoy the pleasure of moviegoing; they just want to feel that the trip is worth it. "You kind of hope that, even if the movie's not that good, there's a lot of people there," said iReporter Basilio.

Heck, even bad can be good, she said, as long as it has enough spirit, which is why "The Expendables" is in her plans.

"That just looks like a ridiculous movie," she said. "Anytime you can get Sylvester Stallone, Jason Statham and Jet Li in a room together you're going to have a party."