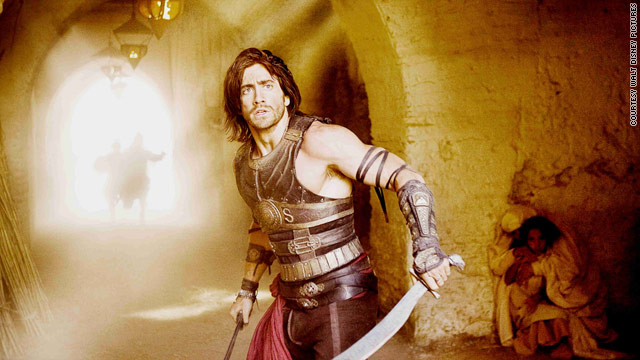 Some fans were none too pleased by the selection of Jake Gyllenhaal to portray the Prince of Persia.
STORY HIGHLIGHTS
RELATED TOPICS

(CNN) -- There was a time when if a white actor or actress was cast in the role of a character of color, there was very little outcry.

When Swedish actor Warner Oland portrayed Asian detective Charlie Chan or Elizabeth Taylor was cast as Cleopatra, the Queen of Egypt, there was no call for boycotts or publicized outrage.

But times have changed, and these days some fans ask the question why, with so many talented black, Latino and Asian actors, does Hollywood continue to pass them over?

"It seems that not a year goes by where this debate isn't had, and I think it's a worthy debate," said Andrew Wallenstein, editor for The Hollywood Reporter's website. "I think this stems from a long-held frustration regarding the access of minority actors to leading roles. It's bad enough that they are far less likely to be cast in those roles in general, and it's downright galling to them that in roles in which they are perceived as having a natural advantage they are still getting beaten out."

The latest example is the controversy surrounding the news that Angelina Jolie has been tapped to play the Queen of the Nile in a planned film based on the forthcoming biography "Cleopatra: A Life."

A posting about the backlash on CNN's Marquee blog drew more than a thousand responses as varied as from those who argued Cleopatra was Greek and not dark-skinned to those who noted Hollywood productions are often not historically accurate.

"I believe everyone is overlooking the obvious: Cleo was NOT Egyptian, she was of Greek descent," wrote a commenter named Daniel. "Cleo was a Ptolemy and they were Greek descendents of one of Alexander's generals; they married within their own family almost to the point of inbreeding and stayed that way until Cleo's death."

A visitor to the site named Gregory took a different tack.

"[Cleopatra] was an African woman ... before British colonialism so she was a Black woman," he said. "It reminds me of old cowboy movies where the White guy kisses an Indian girl, but in reality she was played by a White starlet with makeup on. Come on people!"

Two years ago, Cambridge University Egyptologist Sally Ann Ashton touched off debate over the queen's look when she used ancient artifacts to produce a computer-generated image of what Cleopatra may have looked like -- complete with olive skin and a full lower lip.

"She probably wasn't just completely European," Ashton told the Daily Mail newspaper. "You've got to remember that her family had actually lived in Egypt for 300 years by the time she came to power."

And others on the Marquee blog pointed out there is an element of suspending belief when it comes to Hollywood.

"It's acting folks," wrote a commenter named Dianne. "You don't have to be the color of the person you're impersonating. How far do you want to take this? We should fire Hugh Laurie immediately because he's an Oxford, England, born actor playing an American on House M.D.?"

Jolie is not the only one caught up in the colorblind casting debate.

Fans recently cried foul at the casting of Jake Gyllenhaal as the Prince of Persia and the young actor Noah Ringer as the adolescent hero Aang and other actors in the upcoming film "The Last Airbender." There were even calls for boycotts of both films.

There appears to be no hard and fast data on how often white actors are cast as characters of color, but some industry observers say it happens enough to raise the ire of some fans.

Craig Detweiler, director of the Center for Entertainment, Media and Culture at Pepperdine University, said Hollywood has "a long and painful history of misrepresentation."

"Whether you are talking about Warner Oland as Charlie Chan or Angelina Jolie as Cleopatra, given opportunities to give actors appropriate roles, Hollywood often defers to box office," he said. "With 'The Last Airbender' you have four Asian/Inuit roles that all went to Caucasian actors."

Detweiler said he believes "Prince of Persia" suffered at the box office because moviegoers didn't buy Gyllenhaal in the title role. "Sometimes Hollywood sabotages themselves by having lower expectations than the audience," he said. "If you think about it, in an America that can elect Barack Obama it's somewhat shocking that supposedly progressive Hollywood can be so regressive in their casting."

Tyler Maddox-Simms is director of the soon-to-be-released film "Love Chronicles: Secrets Revealed," which features an all-black cast including Vivica Fox and Ving Rhames. Maddox-Simms says she has no problem with Jolie playing Cleopatra, though she understands the frustration -- especially given the dearth of roles available for minority actors.

"Personally, in my films I want the best talent, no matter what the color," Maddox-Simms. "For black actresses especially there are so few good roles every year and so few lead parts for actors of color."

THR.com's editor Wallenstein said there is an inherent double standard in that there is not much crossover in the opposite direction with actors of color snagging roles written for whites. Maddox-Simms agrees and said the movie business is simply that -- an industry out to make a profit.

Writer Tambay Obenson reported on the Jolie casting for Shadow and Act, an online collective of writers, filmmakers, film critics and film enthusiasts who discuss primarily film and filmmakers of the African Diaspora. He believes a lack of knowledge about Cleopatra's heritage coupled with anxiety about the movie industry's track record of casting choices may be helping to flame the Jolie controversy.

And he noted that Jolie is a bit of a lightning rod given her past performance as a biracial woman in "A Mighty Heart."

"I have talked to some people who would agree that Cleopatra wasn't black, but the fact that they would cast Angelina Jolie rather than, say, a Mediterranean actress still causes some concern," Obenson said. "There was a lot of backlash about Jolie as Mariane Pearl in 'A Mighty Heart,' and I think that was a bit more warranted."

When it comes to portraying one of the most famous queens in history, at least a few commenters on CNN's Marquee blog found that the color of her skin may not be the only reason Jolie is perceived as not the perfect choice for the plum role.

"Now that we've established that Cleopatra wasn't black, as none of the Ptolemies were and almost none of the Pharoahs, let's get down to the real question," wrote a commenter listed as Snakdar. "Angelina is hot, but she's too old for the part."