Rediscovering 'Fredo' from 'The Godfather' 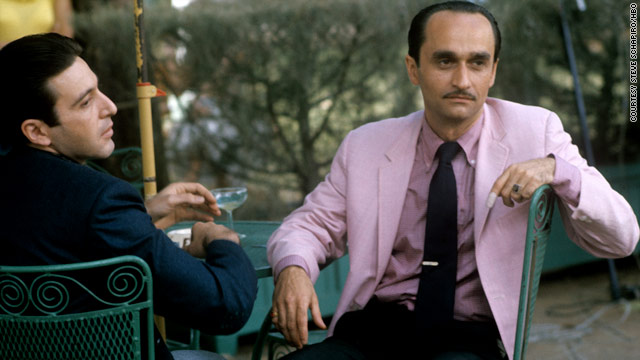 (CNN) -- John Cazale is probably the most famously unfamous actor in the history of cinema.

Fans of the actor, who is most recognized for portraying Fredo in "The Godfather" and its sequel, know his work and love him -- yet practically nothing is known about the man.

"His greatest ability was making the actors and filmmakers around him look really good," said Richard Shepard, director of "I Knew It Was You," a new documentary about Cazale. "He worked on three movies with [Francis Ford] Coppola, he did three films with [Al] Pacino, he did two movies with [Robert] De Niro, and he did a play and a movie with [Meryl] Streep. These people wanted to continue to work with him because they knew he made them better."

The documentary, which airs on HBO Tuesday night, shines a light on the actor and his times. Cazale, who died in 1978 of cancer at age 42, was at the heart of the '70s film golden age, despite appearing in just five films -- "The Godfather," "The Godfather Part II," "The Conversation," "Dog Day Afternoon" and "The Deer Hunter." Every one was nominated for a best picture Academy Award. (HBO, like CNN, is a unit of Time Warner.)

The documentary takes its title from the iconic moment in "The Godfather II" in which Pacino as Michael Corleone grabs Cazale as his older brother, Fredo, kisses him on the mouth and says "I know it was you, Fredo. You broke my heart."

The film was a labor of love for Shepard, a writer who also directed "The Matador." He first saw "The Godfather" as a child growing up in New York and remembered being haunted by Cazale's acting.

"I remember connecting with a sadness in Fredo's eyes," Shepard recalled. "I wasn't a sad kid, but I connected with the vulnerability in that character."

Shepard said that as an adult he looked up information about Cazale and could find very little. He tracked down the actor's brother, an act that began a three-year odyssey.

In the movie, acclaimed actors such as Steve Buscemi and Philip Seymour Hoffman discuss their admiration of Cazale's work, while those who worked with him, such as Coppola, Pacino, director Sidney Lumet and playwright Israel Horovitz, talk about his talent.

But the filmmaker's biggest get was actress Meryl Streep, who worked with Cazale on "The Deer Hunter" and was involved in a love affair with him when he died.

Shepard said it took a year of coaxing to persuade Streep to talk, beginning with Cazale's brother contacting her about the project.

"She's extremely private and she had never spoken publicly about John or her relationship with him," Shepard said. "Once she realized that we had the best of intentions, she was on board."

Shepard said he decided to steer away from straight biography and focus on how Cazale's talent touched others, especially once the director heard both Pacino and Streep speak so powerfully about him.

"He was an interesting guy if you accepted that he liked to drink, he liked to smoke, he liked to sleep around with women and he liked to act," Shepard said. "He was an actor and it's not like he climbed Mount Everest blind. But once Pacino and Streep told me about what he taught them about acting I realized that was where the documentary needed to go."

Cazale's work influenced an entire generation of actors and filmmakers, said director Brett Ratner, who produced the film. But, he added, he believes Cazale has too long been ignored.

"He never got any accolades," said Ratner, best known as the director of the "Rush Hour" films. "His movies garnered like 58 Oscar nominations and he wasn't nominated for a single Academy Award."

Ratner said Cazale is so esteemed partly because of his skill at disappearing into a character.

"He was able to change himself from character to character, unlike some actors who you are always seeing the actor as themselves," Ratner said. "He immersed himself so deeply that he became that character, he just breathed such life into them."

Ratner said he hopes viewers take away from the documentary a newfound appreciation of Cazale's limited body of work. Cazale was his favorite actor, Ratner said, and committed to his art in a way that few are today.

"So many actors now become famous and they completely forget about the craft," Ratner said. "My hope would be that he could receive a posthumous Oscar. That would be great."