The most disturbing movie ever made? 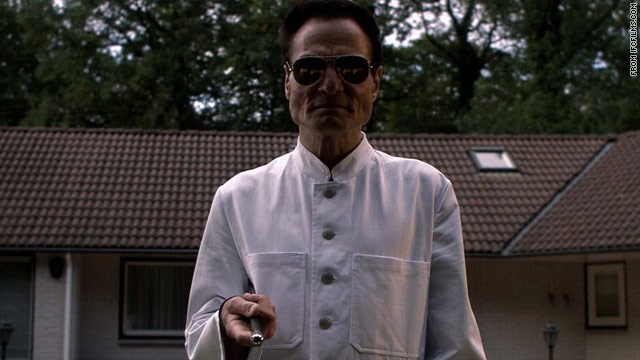 (CNN) -- If the title alone isn't enough to make you squirm, a brief rundown of the premise for the indie horror movie, "The Human Centipede," certainly will. Any film involving three humans sharing a single digestive tract obviously isn't aiming to be easy on the eyes.

Yet director/writer Tom Six's portrayal of a crazed surgeon who takes his skills at separating conjoined twins and uses them to create his own living human insect has left some critics appalled that it was even created; venerated critic Roger Ebert didn't think his star rating system was even applicable.

"No horror film I've seen inflicts more terrible things on its victims than 'The Human Centipede,'" Ebert wrote in his review. "The star rating system is unsuited to this film. Is the movie good? Is it bad? Does it matter? It is what it is and it occupies a world where the stars don't shine."

While the creativity qualification is fulfilled, "Centipede" is different from its torturous predecessors in that the gore is implied rather than shown, asking the audience to use their imaginations and thus creating a more personal, and thereby uncomfortable, viewing experience.

"It's certainly less gory than 'Saw' or the 'Hostel' movies. Despite the fact that it's explicit, the uncomfortable moments are because of what you imagine could happen," said Las Vegas Weekly film critic [LINK] and FilmCritic.com contributor Josh Bell. There's a moment when the first person in the centipede line-up needs to defecate, and the audience is left imagining what the second person in the centipede is going through.

Moments like those are what made even the most die-hard fans leave the Screamfest viewing craving a shower and having not an inkling of a desire to sit through the movie again, Belofsky said. And yet, she added, they'll still "tell their friends that they have to see it because it's so messed up."

Having a desire to watch the movie in the first place may befuddle those who aren't fans of the genre, but for many moviegoers who enjoy a good scare or thriller, part of the interest to watch even the incredibly depraved is to satisfy a curiosity, said Kendall Phillips, Syracuse University Chair of the Department of Communication and Rhetorical research who wrote "Projected Fears: Horror Films and American Culture." The movie has that train wreck or car crash quality that -- sort of like with the viral video "Two Girls, One Cup" -- we crane our necks to get a better view even though we end up wishing we hadn't.

With films that rely less on a body count and more on extended displays of violence or sadism, sometimes people -- particularly adolescent males -- want to watch so they can say they lasted through the viewing, said Indiana University associate professor of telecommunications Andrew Weaver, who has studied the physiological and psychological effects of watching something frightening or disturbing.

"It's not that people like it -- the natural reaction to this kind of movie is fear and disgust," Weaver said. "The gratification comes from pushing yourself and proving to yourself what you can take."

Now, Weaver said, "We have so many more ways to gain access to this kind of stuff. 'Faces of Death' was something that you had to get underground copies of, and now you can find that kind of stuff on the Internet pretty easily."

As a result, "maybe the filmmakers constantly have to push the idea [of torture] more to get that same audience's attention," he added.

The strong reaction to this film, then, "might be the fact that we're more discomforted that someone might defecate in our mouths than someone might cut off our limbs. It's a more visceral revulsion," Bell said.

There are horror flicks going straight to DVD every week that offer a plethora of individuals being hacked limb from limb by one crazed person or another, but the sharing of a gastric system is one that you don't come across, Bell said, and in that sense, yes, the filmmaker did something truly innovative.

"It's foolish to say of any movie that this is the furthest we'll ever go. Someone will see this movie and say, 'I can do more disgusting and more disturbing,' and they'll go out and do it. We can't necessarily imagine it right now, but it will happen," Bell said. "It may happen in the sequel to this movie."

Yep, you read that right -- there are plans to make a sequel to "The Human Centipede" with four times the number of victims, and odds are that someone, somewhere, will be curious enough to watch it.