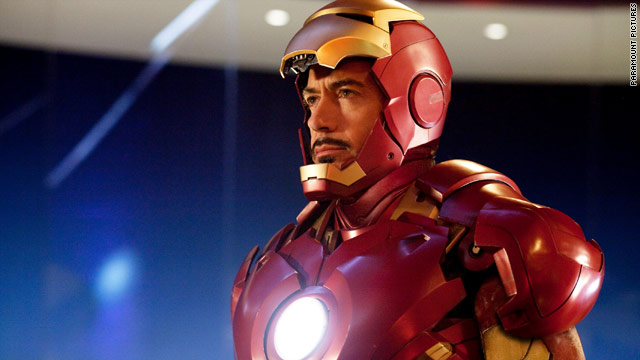 (CNN) -- The first "Iron Man" boasted a not-so-secret weapon in Robert Downey Jr. reveling in his bad-boy rep as the maverick inventor-industrialist Tony Stark. A combination of Bill Gates, Howard Hughes and Hugh Hefner, Stark had more than his share of character flaws for a superhero. Unlike Bruce Wayne, he couldn't keep his heroics to himself, and unlike Clark Kent, he knew how to party ...

Beginning part two in triumphal mode as the star attraction at the Stark Expo, Tony remains a loose cannon, even if he prefers to think of himself as a human shield or "an enhanced prosthetic" as he tells the Senate committee charged with reminding Iron Man of his patriotic duty.

They want an invincible army, not a one-man defense system. Stark is having none of it. He's too good for government work. "You should thank me," he tells them. "I've privatized world peace."

But the politicians aren't the only ones who want a piece of him. So does rival weapons manufacturer Justin Hammer (Sam Rockwell), and more pressingly, Ivan Vanko (Mickey Rourke), a Russian who has a bone to pick with the Stark family and a shortcut to the kind of technology that could prove a real threat. Add to that the realization that his new artificial ticker is slowly poisoning him, and there's more than enough to bring this shooting star back down to Earth.

The trouble with this sprawling scenario (credited to Justin Theroux of "Tropic Thunder" fame) is that it mutes Downey's cavalier charisma. He's still what makes this show tick, but I'm not sure we want to see him wrestling with his own mortality when it's his instinctive immorality that's his sexiest attribute.

Still, returning director Jon Favreau has seen to it that the supporting actors (including one Jon Favreau as chauffeur Happy Hogan) are ready to step up and take a turn in the spotlight.

There's Samuel L Jackson in an eye-patch, continuing to lay the groundwork for his own Marvel vehicles, "Nick Fury" and "Avengers."

Sam Rockwell struts his stuff in a fun satire of an out-of-control CEO.

And Scarlett Johansson peels on the rubber cat suit as undercover agent Natasha Romanoff. (Sadly she's restricted to just the one showpiece action sequence, and even then she's eating Hit-Girl's "Kick-Ass" dust).

And then there's Mickey Rourke. Covered in Russian tattoos, and with a salt and pepper goatee, he strides the wrong way round a Formula One Grand Prix, stripped to the waist, slicing racing cars in two with a crack of his supercharged whips.

Rourke doesn't say much, and half of what he does say is in Russian, but he can sit, silent and motionless, and let Downey or Rockwell talk at him for a full minute, and still command our rapt attention. To the extent that "Iron Man 2" gets its groove back, Rourke's sly bad guy is the reactive core.

Unlike some blockbuster directors, Favreau is most comfortable with the actors, making the scenes play. He's less adept at the hydraulics. The whiz-bang stuff here -- while never less than slick -- doesn't produce anything we haven't seen before.

The movie's biggest problem is that the fight scenes aren't all that, maybe because the outcome is never in question.

If that's the pay-off for what remains a sharper, snappier comic book movie, then so be it, but here's hoping the next one doesn't completely lose its edge.