Peter Jackson stands up for his 'Bones' 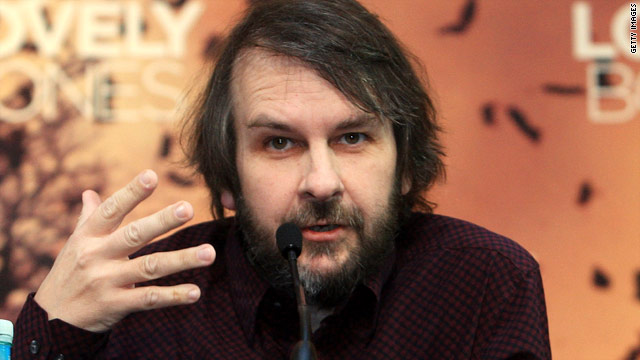 Peter Jackson defends "The Lovely Bones" in the face of criticism. "The film is very much what we set out to make," he said.
STORY HIGHLIGHTS

(CNN) -- Before "The Lovely Bones," the aughts had been a charmed decade for Peter Jackson.

It began with the one-two-three punch of the "Lord of the Rings" trilogy, a juggernaut that grossed almost $4 billion worldwide at the box office and won 17 Oscars -- 11 of those, including best picture and best director, for the final chapter, "The Return of the King."

Jackson followed "Rings" with his 2005 remake of "King Kong," which was another huge success both at the box office and with critics. He donned his producer's hat for 2009's "District 9," a low-budget South African film that made $200 million worldwide and was nominated for best picture.

But "The Lovely Bones"? Not such a lovely story.

Box office was sluggish and reviews were mixed to negative, with even the favorable reviews less than wholehearted in their praise. The negative reviews, on the other hand, were unstintingly caustic, criticizing Jackson for his "hammy direction" and a "garish, pointless and downright inept rendering of Alice Sebold's 2002 novel."

"It's as if the filmmaker, faced with an endless series of daunting creative choices, proudly took the wrong road each and every time," wrote the Boston Globe's Ty Burr.

Jackson makes no apologies for the film, which comes out Tuesday on DVD and Blu-ray.

"I wouldn't change the film. The film is very much what we set out to make," he said in a phone interview from his home base in New Zealand, where he's engaged in pre-production on a version of "The Hobbit" to be directed by his friend Guillermo del Toro. "I don't know what I'd do differently."

Blog: What's up with "The Hobbit"?

The challenges came with the territory, he observed. Sebold's book -- a surprise best-seller upon its 2002 release -- concerns the rape and murder of a 14-year-old girl, Susie Salmon, in 1973 Pennsylvania. As she watches from an afterlife called the "in-between," her family grieves. Her father becomes obsessed with catching the killer, whom he suspects is a neighbor; her mother moves out; her siblings and friends struggle with the tragedy.

Jackson talked about why he was attracted to the material, the film's reception and revisiting 1973. The following is an edited version of the interview.

CNN: What drew you to "The Lovely Bones" and wanting to direct it yourself?

Peter Jackson: It was just really an emotional response to the book. ... As a filmmaker, you're always sort of looking to get excited about something that doesn't remind you of anything you've seen -- that has a quality to it that feels very original. And the film we [partner Fran Walsh, colleague Philippa Boyens and Jackson] started to talk about amongst ourselves and imagine was something that didn't remind us of anything else, which was immediately quite exciting.

CNN: As you are certainly aware, there were many critics who didn't like the movie, and the box office wasn't much. Does that bother you, or do you feel like you achieved the vision you wanted to get on screen?

Jackson: Yeah. I wouldn't change anything in the film. I think it's a difficult film. ... To actually go to the movies is a particular thing that you make a decision to do, and to go and see a film essentially about a 14-year-old girl who's murdered -- I can imagine that's not necessarily going to be at the top of everybody's list as a must-see film. In a way it was always going to be a difficult film from that point of view.

Hopefully on DVD it'll have a slightly easier audience, because watching a DVD doesn't have the monumental decision that going out to the movies has.

But certainly I wouldn't change the film. The film is very much what we set out to make. I don't know what I'd do differently.

CNN: In the film there's this mix of thriller elements, along with the quieter -- for lack of a better term -- more sentimental elements that take place in the "in-between." It seems to be a tough blend to get on the screen.

Jackson: Yes, it is. And we didn't want to make an overly sentimental film, either. We wanted it to be emotional but without obvious sentimentality. The book does give you a feeling of that mix, and I guess the movie is an adaptation of what we read in the book, where you're balancing the real world with essentially this sort of in-between state that Susie finds herself. And the scenes in the in-between have to have a relationship with what's happening on Earth, so it all supports the same story.

CNN: This must have been a real change of gears for you -- you said you came across the book while doing "The Two Towers," and there was still "Return of the King" and "King Kong" to come. But this is going back to more of the small-scale stuff you did with "Heavenly Creatures" [1994].

Jackson: Yeah. Yeah, it is. And I'd be very happy to do it again. I didn't really ever want to be branded as being this big-budget sort of fantasy filmmaker, and after "King Kong," I'd done the very best I could ... with films of that scale, and I sort of felt that if I continued on, I'd start to repeat myself. So the idea of doing something that was a smaller scale and had a whole lot of different ingredients to it was certainly very interesting.

CNN: The film takes place in 1973. Was it fun for you to recreate that time?

Jackson: It was fun because we're contemporaries of Susie. She was 14 in 1973, Fran was 14 in 1973, I think, I'm a year younger -- I was 13 -- but I remember 1973 very well. "Live and Let Die" came out -- my childhood is marked by James Bond films and that was the year of "Live and Let Die." And it was fun, since we were recreating the shopping mall full of the stuff that we used to look at when we were going to malls with our parents. It was our time. It was our era.