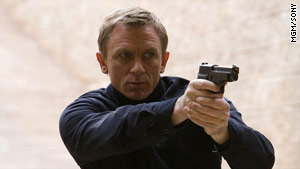 Los Angeles, California (CNN) -- The big-screen adventures of James Bond are on hold because of the financial woes of MGM, the studio that distributes the movies, producers said.

The 23rd Bond film was in pre-production for a release next year.

"Due to the continuing uncertainty surrounding the future of MGM and the failure to close a sale of the studio, we have suspended development on BOND 23 indefinitely," producers Michael Wilson and Barbara Broccoli said in a joint statement. "We do not know when development will resume and do not have a date for the release of BOND 23."

MGM has been on the brink of bankruptcy as it works with creditors to find a new owner.

The James Bond series is the longest-running film franchise in history, with the first movie about the world's most famous fictional spy -- "Dr. No" -- released in 1962.

The movie franchise and merchandising are controlled by EON Productions. Wilson and Broccoli took over the 007 franchise from Albert "Cubby" Broccoli in 1995.