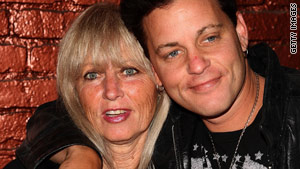 Corey Haim, 38, died after collapsing in the apartment he shared with his mother, Judy Haim.
STORY HIGHLIGHTS

Los Angeles, California (CNN) -- The autopsy on Corey Haim revealed the actor's heart was enlarged and his lungs were filled with water when he died, Haim's manager said.

Heaslip said this was evidence that Haim's death was not caused by a drug overdose, but Brian Elias with the coroner's office said they are waiting for toxicology tests before deciding what killed Haim.

The 1980s teen movie actor, who struggled for decades with drug addiction, died early Wednesday after collapsing in the Los Angeles apartment he shared with his mother, authorities said.

Heaslip, manager to both Feldman and Haim, said he seemed to be winning his battle against drug abuse in the weeks before his death.

Haim was in the apartment he shared with his mother, Judy Haim, when he "became a little dizzy, he kind of went to his knees in the bedroom," Winter said. "His mom assisted him in the bed. He became unresponsive."

Haim had suffered from flulike symptoms for two days, the deputy coroner said.

"We found no illicit drugs. However, we did recover four of his prescription meds at the location," Winter said, adding he does not know what those drugs were.

Haim was "weaned down to literally zero medications" in the past two weeks by an addiction specialist, Heaslip said on HLN's "Issues With Jane Velez-Mitchell" on Wednesday.

The doctor "put him on a new line of medications," Feldman said on CNN's "Larry King Live" on Wednesday.

Heaslip that said Haim's mother, Judy, told him "there were no signs of him overdosing."

His death came as his career was picking up, with Haim booking "movie after movie," Heaslip said. His latest film is set for release soon, he said.

Feldman said he was angry about how Haim has been snubbed in recent years by the entertainment industry. He was broke, without a car and living in a month-to-month rental apartment with his mother, he said.

Video: Why do child stars burn out?

In later years, the two friends -- who appeared in eight movies together -- struggled with drug abuse and went their separate ways. They reunited for a reality show, "The Two Coreys," in 2007, but A&E Network canceled the program after slightly more than a year.

In a 2007 interview on CNN's "Larry King Live," Haim and Feldman discussed their battle with drugs. Feldman told King that he had gotten clean, but it took Haim longer.

Haim was born December 23, 1971, in Toronto, Ontario, according to a biography on his Web site. He made his first television appearance in 1982 on the Canadian series "The Edison Twins." His first film role was in the 1984 movie "First Born."

Following "The Lost Boys," Haim and Feldman appeared in "License to Drive" and "Dream a Little Dream."