Can talent outweigh size in Hollywood? 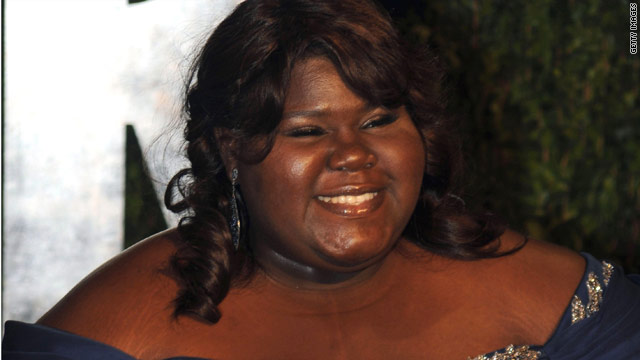 Gabourey Sidibe has been at the center of debate questioning whether her size will cut her growing career short.
STORY HIGHLIGHTS

(CNN) -- Not even a full week has passed since Gabourey Sidibe attended the 82nd Annual Academy Awards as a best actress nominee and we're already questioning whether her career is over.

Despite the accolades bestowed upon the actress in the past few months, it's unclear if the film industry can go against the norm and cast a young woman who is not only African-American, but also larger than the Hollywood standard in a non-niche role, as the romantic lead in a major film vehicle, for example.

During Howard Stern's Sirius satellite show on Monday morning, co-host Robin Quivers commented that Sidibe should have looked around at the Oscars and noticed that none of the other working actresses looked like her.

"What movie could she play in?" Stern questioned on his live broadcast. "You feel bad because everyone pretends that she's part of show business, and she's never going to be in another movie."

The comments made on Stern's show sparked a heated debate among moviegoers and industry observers, with some believing the shock-jock was simply saying what everyone else is thinking.

Jeffrey Wells, a columnist who's lent his candid perspective on the industry to a variety of outlets over the years and now blogs about it on HollywoodElsewhere.com, said in an e-mail, "Gabby is a lovely person and a fine actress, but the hard fact is that she's way, way too fat," adding that the actress will suffer from health problems as well as limited career opportunities if she doesn't lose weight.

"I don't want Gabby to not work, but the only roles she'll have a shot at playing will be down-market moms and hard-luck girls working at Wal-Mart," Wells continued. "No casting director would choose her to play anyone in the upscale executive world ... because no one in the executive world looks like her."

Robert Ulrich of Ulrich, Dawson and Kritzer casting, acknowledged that "every role will not be open to her," but thinks now more than ever, directors and producers are interested in seeing something different than what's written on the page.

"We hear over and over to think outside the box. I've been in the industry a long time, and it's never been as open to people being something different than now," Ulrich said. "I work on 'Glee,' and those actors never would have been cast on network television a few years ago. It's a show about diversity, and it's a hit."

The thing about Sidibe, casting directors said, is that aside from the irresistible charm, wit and confidence she exhibits in interviews, which certainly don't hurt her prospects, she's a remarkable talent. The 26-year-old, who was born in Brooklyn, New York, displayed an irrefutable amount of it in "Precious," and her performance becomes more mind-boggling when one learns that her resume previously contained just two small parts in college plays.

"That was an incredibly difficult role," said Rachel Tenner, a casting director for best picture nominee "A Serious Man."

"And from what I know of Sidibe, she's not from that world. This [character] wasn't something she knew, and she tapped into something pretty dark." Having already had critics rave about her dramatic ability will work in her favor, Tenner said. "I know for myself, good is good, great is great, and as a casting director, that's what I want."

Tenner is right that Sidibe is as far removed from the film's lead character as one can be, a fact that has been hammered home repeatedly since the movie opened to highlight Sidibe's acting ability.

As Sapphire, the author of the novel "Push" that "Precious" is based on, put it during an interview with CBS News' Katie Couric last fall, it's not like they used a girl who has a story similar to the lead character, where they could simply put her on camera and tell her to think about her mother and cry.

"This girl is a real actress," Sapphire said. Typically, she added, "when we do have an actress that looks like her, she's the comic character or the old woman or something, [but] we have a heavy, dark-skinned black woman as the star of the show."

Tenner insisted that the star power Sidibe showed in "Precious" will be enough to help her push past the presumptions about what type of role she can and cannot play.

"Obviously, there aren't a million parts made for her," Tenner said. "Do I read 50 movies a year that are for her physicality? No. But, there are a lot of directors who appreciate the work that she did, and that may help her get considered for roles that are not written for her."

Thus far Sidibe's skill has snagged her a role in a Sundance Lab film, "Yelling to the Sky," where she portrays a popular high school bully.

"I'm excited that anyone could take a look at ['Precious'] and think I could play Miss Popularity," Sidibe told film critic Roger Ebert in November, adding that she understands full well the box Hollywood would like to put her in.

On Tuesday, Showtime confirmed that Sidibe has a recurring role in a half-hour dark comedy called "The Big C," starring Laura Linney, where Sidibe will yet again tap into her inner teenager to portray a troubled student.

"The Big C's" executive producer, Vivian Cannon, said Sidibe was asked to come in after word began to spread of her "Precious" performance at the Sundance Film Festival.

When Sidibe read for the role, "she blew everyone away," Cannon said. "She had great comedic timing. Gabby can play whatever she wants to play -- she's that good. I'm hard-pressed to see anyone else like her."

"Crash" and "Iron Man" casting director Randi Hiller agreed that Sidibe's reputation as a talent to be reckoned with, complete with best actress nomination, will help open doors that would normally be closed to her because of the way she looks.

"Getting cast is never easy. You can ask any actor, they lose jobs every single day that have nothing to do with talent," Hiller said. "Sidibe will have those same problems, but it may not be as hard for her because she already has an Oscar nomination."

Nikki Blonsky, the plus-size actress who generated plenty of buzz when she starred in 2007's "Hairspray," has been painted as the poster-child for the reality of the industry; an example of what happens to talented actresses who aren't the physical ideal.

But Hiller believes it could be different for Sidibe because of the way she's made a name for herself as a dramatic actress. "With 'Hairspray,' it didn't have as much of an arc as 'Precious,' " Hiller said. "Blonsky was great in it, but it didn't require the level of acting that Gabby had to reach."

To Hiller, the problem isn't that there aren't any roles suited for Sidibe in particular, but the lack of parts for any kind of woman. "There will be 135 roles for men and then six for women. There are so few roles for women in general, regardless of race or size," she said.

In the end, Hiller said she believes Sidibe's career will be dictated most not by the number on the scale but the number of people buying tickets to see her films.

"The trend, quite honestly, is driven by the box office," Hiller said. "It depends on whether or not people turn out to see those movies."