Oscar forecast: And the winners will be ... 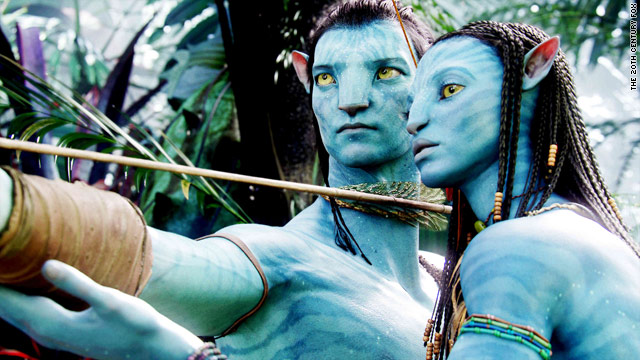 "Avatar," the highest-grossing film of all time, is up for nine Oscars, including best picture.
STORY HIGHLIGHTS

(CNN) -- For the first time in almost 70 years, the Academy of Motion Picture Arts and Sciences has made room for 10 nominees for best picture.

That's no reflection of an exceptional peak in cinematic artistry, but rather a bid to stem faltering ratings for the Oscar telecast over the last decade.

Will it work? If they want ratings, they should get Simon Cowell to pick the winners. Asking Taylor Lautner to show his face is not going to attract younger viewers to a show hosted by Steve Martin and Alec Baldwin, and a nomination or two for "District 9" won't change that.

On Sunday, we'll see how it affects the rhythm of the ceremony itself, but right now, I'll bet most people would have a hard time naming more than half the contenders.

Video: Who will bring home Oscar?

Ten nominees or not, this has become a two-horse race between anti-war war movies. On the one hand, there's James Cameron's box office champion "Avatar," the 3-D sci-fi spectacular destined to save Hollywood (if not the planet). On the other, there's Kathryn Bigelow's incendiary Iraq thriller, "The Hurt Locker," a critics' favorite that was barely released. If it won, "The Hurt Locker" would be the least commercially successful best picture in decades.

Could David conquer Goliath? The Academy's new first-past-50-percent voting system gives the underdog a real chance. Assuming no film gets 51 percent straight off the bat, the film with the lowest number of votes is eliminated after the first round, and that film's ballots' second choices come into play. It wouldn't be surprising if supporters of "An Education," "The Blind Side" and "Precious" rated the more Oscar-friendly "Hurt Locker" significantly above "Avatar."

It could be a squeaker, but we'll never know, because the Academy won't disclose the margin of victory (though it might make better TV if it did).

So, I still expect "Avatar" to come away with best picture. This blockbuster is a remarkable accomplishment technically and artistically, it plays to a certain Hollywood liberalism and it helps the industry feel more confident about the future at a time when it's vulnerable -- a potent combination.

Lost in all the hype are at least two better films: "Inglourious Basterds" -- which you might call a pro-war war movie -- and (my favorite), the Coen brothers' masterpiece, "A Serious Man." But, hey, that's showbiz.

(Predictions of who the Academy will pick are in bold:)

It never makes sense when the Academy decides the best director didn't make the best picture, but of course it often happens. This year, I expect Kathryn Bigelow to take it as a consolation prize and because the Academy knows a female victory is long overdue in this category. One day, I would be interested to hear an explanation for how Lee Daniels ("Precious") was nominated and Joel Coen overlooked, but until then, I will content myself by pointing out that Quentin Tarantino choreographed the year's most unforgettable opening sequence and its best climax, but will certainly go home empty-handed.

Helen Mirren ("The Last Station") is there to make up numbers. For Carey Mulligan ("An Education"), the nomination is a kind of coming-out party: America, meet a bright new star in the making. Gabourey Sidibe is superb in "Precious," the single best thing in the movie, illuminating without ever apologizing. Too bad she doesn't stand a chance. That leaves Meryl Streep ("Julie & Julia") vs. Sandra Bullock ("The Blind Side"). No offense to Bullock, who's irresistible if you like that kind of thing, but if the Academy sends Streep away empty-handed for the 12th time straight (she hasn't won since 1982's "Sophie's Choice"), next time, she's going to show up with a firearm under her robe.

It may have been perfect casting, but Clint Eastwood didn't give Morgan Freeman enough to work with as Nelson Mandela in "Invictus." Colin Firth makes suicide look chic in "A Single Man," but the movie hasn't broken out. George Clooney does what he does best in "Up in the Air" -- it's a consummate movie star performance in a role tailored to his talents and persona. In another year, that might have been enough. Jeremy Renner is riveting in "The Hurt Locker," but he's not a star (yet?). And then out of left field comes Jeff Bridges as an alcohol-soaked country singer in "Crazy Heart," the right man in the right part at the right time, and a lock for the Oscar. Everybody likes Bridges, this critic included, but the best male performance of the year wasn't even nominated: Joaquin Phoenix in "Two Lovers."

If the awards season has taught us anything, then we know that Mo'Nique ("Precious") will win the Oscar for best supporting actress, and she will give the best acceptance speech of the night.

If the awards season has taught us anything, then we know that Christoph Waltz will win the Oscar for best supporting actor, and he will pay fulsome (and deserved) tribute to Quentin Tarantino in an idiom that reminds us he's not from around these parts. You could make the case that this was a lead role, but why spoil the party?

Film for film, this must be the strongest category in the field. "Up" is going to win, mostly on the strength of that first 10 minutes. Should win? "Fantastic Mr. Fox" is a joy to behold. "Coraline" should be vying with "Avatar" for the (nonexistent) best 3-D Oscar. But whatever happened to Hayao Miyazaki's "Ponyo," his finest since "Spirited Away"?

Isn't it a bit ridiculous to claim that "District 9" is an adapted screenplay, since it's based on the filmmakers' own 10-minute short film? Be that as it may, Nick Hornby's adaptation of a fragment by Lynn Barber, "An Education," is exemplary screenwriting and fully deserving of the Oscar -- one that will wind up on Jason Reitman's shelf for his witty but glib and under-developed "Up in the Air."

Nice to see "Up" recognized as a piece of writing. "A Serious Man" is the best-written movie by our best movie writers. If "The Hurt Locker" wins this, it will be a signal of a very good night in store for Kathryn Bigelow et al, but Quentin Tarantino should have a speech ready to go, since you would have to be deaf and blind not to appreciate the literary qualities in "Inglourious Basterds."