Ed Asner remains high on 'Up' 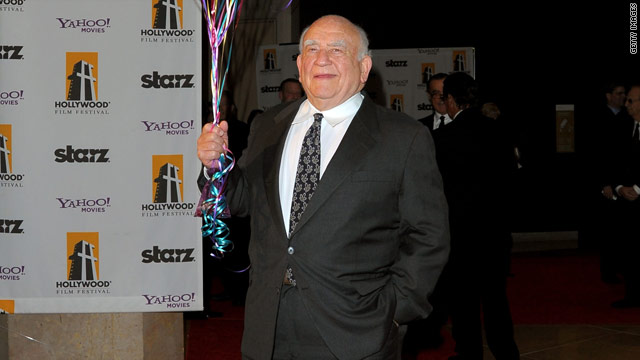 Ed Asner is the voice of Carl Fredricksen, who flies to adventure in his balloon-bedecked house in the Oscar-nominated "Up."
STORY HIGHLIGHTS

These days, a new generation knows Asner, 80, on the big screen -- as Santa from the Will Ferrell movie "Elf" (at least the fourth time he's played St. Nick), and as the voice of Carl Fredricksen, the senior citizen who flies to a South American adventure in his balloon-bedecked house in "Up."

He's currently touring as Franklin D. Roosevelt in a one-man show based on the Broadway hit "Sunrise at Campobello."

With his tour in full swing and "Up" nominated for five Oscars this Sunday, including best picture, we talked about "Up" and animation, the Oscars (which he'll be attending), FDR and politics. The following is an edited version of the interview.

CNN: What were your thoughts on animation before doing "Up"?

Ed Asner: I've never stopped loving cartoons. I loved cartoons as a kid. I can still look at them and enjoy them. ... I was asked to do Ted Turner's "Captain Planet" series. I played Hoggish Greedly [makes pig sounds]. I loved inventing shtick for him, and it served a very noble purpose at the same time.

CNN: And then when you saw what Pixar's been doing ...

Asner: To tell you the truth, I hadn't seen any Pixar until I went to see "Wall-E" and I watched it and I was shocked to see how adult it was, with the setting in our lives, both present and future, and how they dealt with it. ... And then quite relieved to find that the one I was working on, "Up," how adult it was.

If I would fault the producers [and] distributors in any way [it's that] they didn't find some better way to immediately make adults realize that this was as much for them as for kids. ... My God, that four-minute passage in there detailing their life together. We all wish that our lives could be displayed as beautifully as that one is.

CNN: One group you've worked very hard for is the older performers in the industry. This film has something to say about that stage of life and filling it with meaning.

Asner: Exactly, exactly. It's one of the reasons I wish it had been bruited about more. ... We're a larger and larger nation of seniors, and the need to provide meaningful product for them to watch, rather than the bang-bang-boom-boom, the noise-deafening that I'm confronted with, either on TV or in movies, something that's sweet and lovely and deals with me. "Up" certainly does it and I think it would serve as a good sign to get live action to follow it more.

CNN: How do you feel about animated features competing in the best picture category?

Asner: What is the final product? It is a movie. What is the quality of that movie and why shouldn't it be made to be equal among equals? ... In the same way you can put "Avatar" up there with "Hurt Locker," how much difference is there putting up "Up" against "Hurt Locker"?

CNN: Taking "Up" out of the running, what do you think was the best film of the year?

Asner: Well, as much as I was tremendously gratified and pleased by "Hurt Locker," I was disappointed that ... "The Messenger" was widely overlooked, and I think it's a marvelous film and achieves a far greater commentary for the public than "Hurt Locker" does. ... For me, "The Messenger" conveys to the public, brilliantly portrayed by its two stars, the effect of waging a war and what it does to our young people and those people they left behind.

CNN: I want to talk a bit about the FDR show you're doing. How did that come about?

Asner: I had nothing to perform on a cruise ship, the Theatre At Sea cruise ship. [Theatre At Sea president] Philip Langner thrust it at me and I did a reading of it and it seemed to go well. And, subsequent of that, he talked about running a one-man touring show with it. And I said fine -- I had nothing better on my mind except watching the increased box office of "Up." [laughs] I set to work on it and I finally mastered it, and I love working anew on it every night I portray it. ... What I'm doing there, I'm a Ghost of Christmas Past, I guess you can call me, taking people through the latter years after "Sunrise at Campobello." It was written by Dore Schary.

CNN: FDR died when you were about 15, so he was president for all your childhood. Did [his] influence stay with you into adulthood and sway your political views?

Asner: Oh, it certainly did. ... Through all those years, I never found any giant to compare to him and now, many, many years later, I wonder why is he not worshipped more in this country for what he did ... and many of his successors have tried to tear down what he has established for this country. He gave us the socialism that we have in this country now that all those tea-baggers can't recognize. And I would like to see how they felt about socialism if we removed Social Security, unemployment insurance, child-labor laws, old-age pensions and what have you -- how they would flail about without that safety net.

CNN: What kind of response are you seeing from the audience?

Asner: It's almost a letdown, because when they greet me afterward, it's primarily "How do you do it? How do you ..." Their praise is for my having achieved the mastery of all the lines. ...

The best compliment that I got was one of my first shows. A young lady who worked at the theater said, "When you began, I heard Roosevelt, but by the time you finished, I saw him." I couldn't ask for anything better than that.