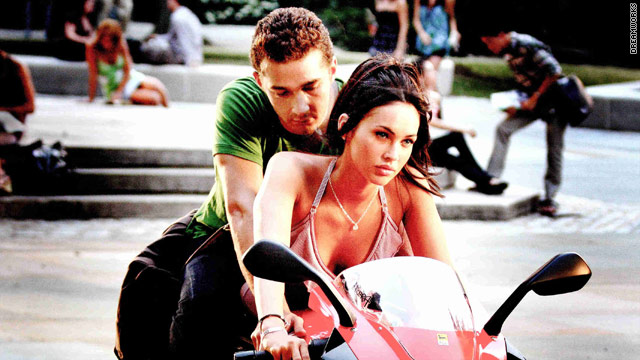 (CNN) -- "Transformers: Revenge of the Fallen" and "Land of the Lost" now have another dishonor to add to the critical lambasting they took upon release: the two films are tied for most Razzie nominations for worst films of the year.

"Land of the Lost," the Will Ferrell remake of the early-'70s Sid and Marty Krofft children's show, earned nods for worst picture, worst actor (Ferrell), worst director (Brad Silberling) and worst screen couple (Ferrell and "any co-star, creature or 'comic riff,' ") according to the Razzie list.

"Head Raspberry" John Wilson, author of "The Official Razzie Movie Guide" and chief of the Golden Raspberry Award Foundation, acknowledges that the organization might be risking a backlash from "Transformers" fans, who made the film the No. 2 highest-grossing film of 2009 with more than $400 million at the domestic box office.

"This is not the first time we've nominated something that made that kind of money," he said, noting that the "Star Wars" sequels "The Phantom Menace" and "Attack of the Clones" also earned Razzie nods.

But he doesn't apologize for the inclusion of "Transformers": " 'Transformers,' to me, is the personification of what's wrong with Hollywood right now," he said. "It's all about do what already worked, pander to the audience, put in a lot of special effects. ... It's almost as though when they were editing the thing they had a little egg timer running, and every seven minutes something had to blow up or somebody had to yell, 'Go go go go! Run run run run!' "

Other nominees for worst picture are "All About Steve," "G.I. Joe: The Rise of Cobra" and "Old Dogs."

Wilson observed that Bullock, presuming she gets an Oscar nomination Tuesday, could become the first person to win both a major-category Oscar and Razzie on the same weekend.

"She's in as good a position as anyone could be to accept both awards," he said. Noting Bullock's good sense of humor, he has hopes that she'll show up at the Razzie ceremony on March 6. (Halle Berry, in a rare appearance by a top star, accepted a Razzie for "Catwoman" in 2005.)

The Razzies, now in their 30th year, are equal-opportunity tributes, giving note to A-listers and D-listers alike. Along with Bullock and Ferrell, nominees this year include Steve Martin ("Pink Panther 2"), John Travolta ("Old Dogs"), Sarah Jessica Parker ("Did You Hear About the Morgans?") and teen heartthrob Robert Pattinson ("The Twilight Saga: New Moon"). Winners receive a hand-made, spray-painted gold trophy with an estimated street value of about five dollars, according to the Razzie Web site.

Wilson was surprised that the Razzie voters, who number about 650, didn't back "New Moon" more strongly. The "Twilight" sequel earned four nominations overall.

"Based on the volume of postings we had on the two forums on our Web site, I would have thought 'Twilight Saga' would have made more categories than it did," he said.

The race is expected to come down to "Battlefield Earth" and "Gigli," which the Razzies named the worst drama and comedy of its first 25 years, respectively.

The Razzies are sticking with tradition, nominating just five films in each category -- unlike the Oscars, which are going to have 10 movies in the running for best picture. But though there were plenty of bad films in 2009, Wilson said, if there were 10 worst picture Razzie nominations, it would dilute the process.

"What I've been saying is, if we had 10, then our awards really wouldn't be any more meaningful than the Golden Globes," he said.

The Gala 30th Annual Razzie Awards will be held Saturday, March 6 -- the night before the Oscars -- at Hollywood's Barnsdall Gallery Theatre.

"All About Steve"
"G.I. Joe: Rise of the Cobra"
"Land of the Lost"
"Old Dogs"
"Transformers: Revenge of the Fallen"

Beyonce / "Obsessed"
Sandra Bullock / "All About Steve"
Miley Cyrus / "Hannah Montana: The Movie"
Megan Fox / "Jennifer's Body" and "Transformers: Revenge of the Fallen"
Sarah Jessica Parker / "Did You Hear About the Morgans?"

Any two (or more) Jonas Brothers / "The Jonas Brothers: 3-D Concert Experience"
Sandra Bullock & Bradley Cooper / "All About Steve"
Will Ferrell & Any Co-Star, Creature or "Comic Riff" / "Land of the Lost"
Shia LaBeouf & either Megan Fox or any Transformer / "Transformers: Revenge of the Fallen"
Kristin Stewart & either Robert Pattinson or Taylor Whatz-His-Fang / "Twilight Saga: New Moon"

"G.I. Joe: Rise of the Cobra"
"Land of the Lost"
"Pink Panther 2" (A rip-off of a sequel to a remake)
"Transformers: Revenge of the Fallen"
"Twilight Saga: New Moon"

WORST PICTURE of the DECADE

WORST ACTOR of the DECADE

Eddie Murphy (nominated for 12 "Achievements," "Winner" of 3 RAZZIES for his roles in "Adventures of Pluto Nash," "I Spy," "Imagine That," "Meet Dave," "Norbit" and "Showtime")

Mike Myers (nominated for 4 "Achievements," "Winner" of 2 RAZZIES for his roles in "Cat in the Hat," "The Love Guru")

Rob Schneider (nominated for 6 "Achievements," "Winner" of 1 RAZZIE for his roles in "The Animal," "Benchwarmers," "Deuce Bigalo: European Gigolo," "Grandma's Boy," "The Hot Chick," "I Now Pronounce You Chuck And Larry," "Little Man" and "Little Nicky")

WORST ACTRESS of the DECADE

Paris Hilton (nominated for 5 "Achievements," "Winner" of 4 RAZZIES for her roles in "The Hottie & The Nottie," "House of Whacks" and "Repo: The Genetic Opera")

Lindsay Lohan (nominated for 5 "Achievements," "Winner" of 3 RAZZIES for her roles in "Herbie Fully Loaded," "I Know Who Killed Me" and "Just My Luck")

Jennifer Lopez (nominated for 9 "Achievements," "Winner" of 2 RAZZIES for her roles in "Angel Eyes," "Enough," "Gigli," "Jersey Girl," "Maid in Manhattan," "Monster-in-Law" and "The Wedding Planner")

Madonna (nominated for 6 "Achievements,""Winner" of 4 RAZZIES for her roles in "Die Another Day," "The Next Best Thing" and "Swept Away")