2011 is bringing a death to the 'Fantastic Four' family 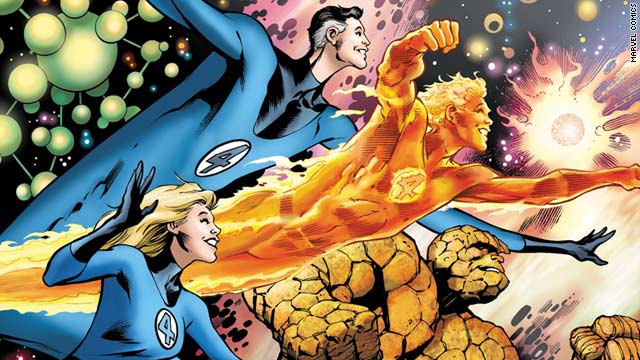 Comic book fans get ready to say goodbye for real to one of the "Fantastic Four."
STORY HIGHLIGHTS
RELATED TOPICS

(CNN) -- In November 1961, few would have realized just how groundbreaking the first issue of "Fantastic Four" would become.

The series -- about a group of space explorers given various superpowers after being hit by cosmic rays -- began a new era for Marvel Comics, signaling the start of their wave of Silver Age characters, including Spider-Man, the X-Men, the Hulk, Iron Man and many more.

Now, nearly 50 years later, the company has announced that the series' current story arc, "Three" -- the next-to-last issue of which hits stores Wednesday -- will result in the demise of one member of the iconic superhero team.

Marvel executive editor Tom Brevoort made it crystal clear: "A core character from the series, whom you've seen in the [2005 and 2007] films, will be no more," he told CNN.

Current "Fantastic Four" writer Jonathan Hickman said that the plot twist grew from a multiyear story he pitched once he started working on the book.

"Everything has led to this moment," he said. "It serves the story and gets where we want for the Fantastic Four."

"This wasn't a case where we started with, 'Let's kill a character,' " Brevoort said.

"[Hickman] had this story, and at one point, he said this character will die. There was never a moment where we said it could be this one or that one. There was only one choice to us as we headed down this series of stories."

Brevoort said this character's death will have a ripple effect on other Marvel books.

"The hook is the fact that one of the four characters will be shuffling off this mortal coil. That's really a small part," he said.

"What we're actually doing is completely transmogrifying the 'FF' as a thing. At the end of this story, there won't even be a book called 'Fantastic Four' anymore; there will be something new that will be interesting and exciting. Out of this moment, a new thing will be born."

Indeed, Marvel recently announced that the first issue of a new series called "FF," subtitled "A Beginning," will hit stores in March.

This isn't the first time the team has experienced what at least seemed to be a death in Marvel's "first family."

Then there was Superman's death in 1992 and Captain America's in 2007, which made big headlines at the time. And as with those characters, most seem to return eventually.

"Mainstream comics have done these 'Death of ...' stories so frequently, never keeping the characters dead, so it's lost all meaning to me as a fan," said Bob Bretall of comicbookpage.com, who nevertheless said he is really enjoying the current "Fantastic Four" story arc.

"Look no further than the upcoming 'death of Spider-Man.' Of course, it's not the 'real' Spider-Man, it's [the alternate universe] Ultimate Spider-Man."

Comic book reader/iReporter Omekongo Dibinga is also not a fan of characters dying and coming back: "It's like a musician saying they're retiring and they keep coming back, like Jay-Z."

In response, Hickman said the ultimate gauge of its success would be its resonance with readers.

"I wanted to invert [the 'Mad Men' formula], to take a book about adventure and science fiction but inject nostalgia into it. Because that is the way the book feels now, this will resonate," he said. "When you couple that with the fact that all of this was planned in advance and we're working toward a goal, I feel that we will be confident that we did a good job."

"It's very easy to develop cynicism about the stories we tell," Brevoort added. "The only way to combat and conquer it is to have a story that touches on the humanness of people that has emotional resonance and truth to it. The fact of death is something every human being can relate to. I would argue that a well-told story of a character's demise is not necessarily undone by them coming back later."

Brevoort went on to say that response from readers to the story has grown over the past few months, due in no small part to the way events have played out.

"We've tightened the screws and had each member in a critical life-or-death situation," he said. "Once you get to [the most recent issue], you hopefully will have absolutely no idea which character will take the fall because there are dire circumstances and threats that make it unlikely that anybody will get out. It's amazing that all three get out alive."

Indeed, it's become a popular guessing game among readers as to which member will kick the bucket. Bretall believes it will be Johnny Storm, a.k.a. the Human Torch, since his death has not even been hinted at in previous stories. (Both the Torch and the Thing are holding down the fort at the team's Baxter Building, which the army of the Anti-priest plans to attack.)

Dibinga is betting that the Thing will be the one to perish. "He is the one who is the easiest to replace. There are not many characters with the powers of the other three," he said. "Plus, he's not a direct part of the family, so he would be the easiest to let go."

Quite possibly the most recognizable character of the group, the loss of the Thing (known for the catchphrase "It's clobberin' time!"), would be especially heartbreaking because he only recently has been able to go back to his normal appearance for one week out of every year. At the same time, he appeared in an image released Tuesday promoting this spring's big Marvel event, "Fear Itself."

Invisible Woman seemed headed for danger, having told her family that she was leaving to "referee a harmless meeting" about New Atlantis, which has turned out to be anything but. Bretall points out another clue, though: "On the cover of 'FF #1' they have three hexagons, two filled in & one clear, which I'm guessing represents Sue."

As for team leader Mr. Fantastic, he's currently dealing with the planet eater Galactus, who has reared his ugly head once again, and that's never good.

"It will come sealed in a bag," Brevoort said. "I cavalierly called it the 'death shroud.' " The black bag with the "Fantastic Four" logo and a number three has been compared --- even by Brevoort --- to the bag that carried the "Death of Superman" issue.

"In this modern-day internet era, it's very difficult to keep any surprise a surprise," he said. "Another predilection of our core constituency is they like to keep their books pristine. It will cause someone real pain to ruin the story and scan it."