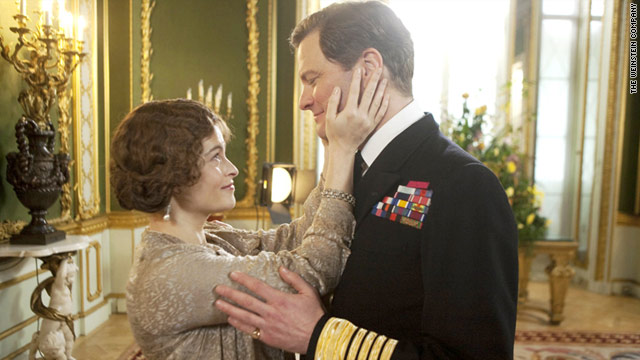 "I'm truly grateful to be recognized by the Hollywood Foreign Press for this film, and euphoric to be in the company of so many of my colleagues," Firth said.

"The Social Network" and "The Fighter" followed with six nominations each, including best film -- drama, joining "Inception" and "Black Swan."

As many critics predicted, Natalie Portman scored recognition for best actress in a motion picture -- drama for her work in "Black Swan." Other nominees for best actress include Halle Berry for "Frankie and Alice," Nicole Kidman for "Rabbit Hole," Jennifer Lawrence for "Winter's Bone" and Michelle Williams for "Blue Valentine."

The Golden Globe nominees are...

Joining Firth in the best actor in a motion picture nominations were Jesse Eisenberg for "The Social Network," James Franco for "127 Hours," Ryan Gosling for "Blue Valentine" and Mark Wahlberg for "The Fighter."

On the small screen, familiar names such as "Glee," "30 Rock" and "Modern Family" snagged nominations in the best TV series -- comedy category, along with "The Big C," "Nurse Jackie" and "The Big Bang Theory."

Last year's winner for best actor in a comedy TV series, Alec Baldwin from "30 Rock" was again nominated along with Jim Parsons from "The Big Bang Theory," Steve Carell for "The Office," Thomas Jane for "Hung" and Matthew Morrison for "Glee."

Baldwin expressed his joy with the nominations.

"'30 Rock' is back, bigger and better than ever," he said. "We are very grateful to the Hollywood Foreign Press."

This year's nominees for the best TV drama series include "Dexter," "The Good Wife" and "Mad Men" as well as newcomers "Boardwalk Empire" and "The Walking Dead."

Actor Johnny Depp pulled off a double nomination in the category for best actor in a motion picture -- comedy or musical for his role in both "Alice in Wonderland" and "The Tourist."

British comic Ricky Gervais will return to host the Globes award ceremony, which will air live January 16 on NBC.

Gervais said he will push the envelope even more than he did when he hosted the last show and took jabs at NBC and the Foreign Press Association.

The following is a full list of the nominees:

Best performance by an actress in a motion picture, drama

Best performance by an actor in a motion picture, drama

"The Kids Are All Right"

Best actress in a motion picture, comedy or musical

Annette Bening, "The Kids Are All Right"

Anne Hathaway, "Love and Other Drugs"

Julianne Moore, "The Kids Are All Right"

Best actor in a motion picture, comedy or musical

Jake Gyllenhall, "Love and other Drugs"

"How to Train Your Dragon"

I Am Love (Italy)

In a Better World (Denmark)

Best actress in a TV series, comedy or musical

Best actor in a TV series, comedy or musical

Lisa Cholodenko and Stuart Blumberg, "The Kids Are All Right"

"Bound To U" from the film "Burlesque"

"I See the Light" from the film "Tangled"

"There's a Place for Us" from the film "Chronicles of Narnia: The Voyage of The Dawn Treader"

"You Haven't Seen the Last of Me" from the film "Burlesque"

"Pillars of the Earth"

Best actress in a mini-series or TV movie

Hayley Atwell, "Pillars of the Earth"

Best actor in a mini-series or TV movie

Ian McShane, "Pillars of the Earth"

Best supporting actor in a series, mini-series or TV movie