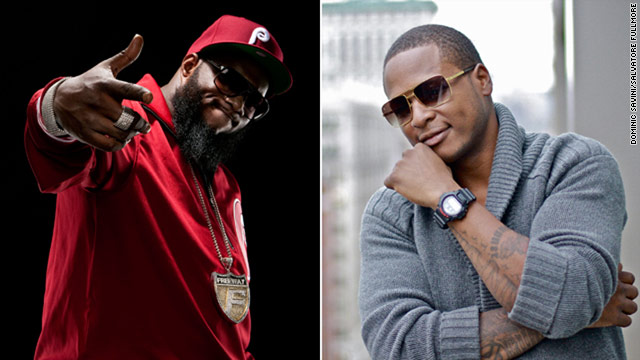 Philly rappers Freeway, left, and Young Chris are performing at a high school that has taken a stand against racial violence.
STORY HIGHLIGHTS

Philadelphia (CNN) -- It's pretty clear from his hard-hitting lyrics that Philadelphia rapper Freeway is no stranger to street life.

He lost a cousin and close friend to gun violence. He's also had his own run-ins with the law, having served jail time for drug possession.

His experiences haven't left him jaded, though. When the devout Muslim heard about a violent uprising at South Philadelphia High School last year, he got involved.

"I'm from where they're from," said Freeway, whose real name is Leslie Pridgen. "I can talk about those experiences [on the street], but I am a businessman now. I wouldn't take nothing back. It's shaped me as a man."

On December 3, 2009, as many as 30 Asian immigrant students were attacked throughout the school day, several of whom were sent to the hospital.

Since then, Freeway has been working with nonviolence campaigns at several high schools in Philadelphia. In October, he traveled around the city aboard MTV's "Get Schooled" bus with Grammy winner Common and Marsha Ambrosius of Floetry fame. The goal was to inspire students to stay in school and raise awareness about staggering dropout rates.

Freeway, along with his fellow Philadelphia rapper Young Chris, will be performing Thursday at South Philly High.

"Who better to talk than people who grew up in Philly and did something positive with life? I was subject to the same things they were," said Freeway, who originally signed with Jay-Z's Roc-A-Fella Records, and is now with Rhymesayers Entertainment.

"I'm going to speak from the heart, but it's up to them to make the choice."

Who better to talk than people who grew up in Philly and did something positive with life?
--Rap artist Freeway
RELATED TOPICS

Young Chris, born Christopher Ries, said he was also "shocked and disappointed" when he heard about last year's incident at South Philly High. He says he's participating in the rally to encourage the students to keep the momentum.

"Whether we want to believe it or not, they look at us as mentors," he said.

The event is part of the Project Succeed Campaign unveiled by state Rep. Kenyatta Johnson, D-Philadelphia, in October.

Event organizers wanted a concert for the student rally but had concerns about booking rap artists.

Rhymes laced with drug and gang references, and verses peppered with the "n-word," left them skeptical, according to Johnson's spokeswoman, Shalimar Blakely.

They voiced their concerns with the managers for Freeway and Young Chris, and Blakely said she was encouraged not to hold all the lyrics against the performers.

"They may speak about violence and their experience in the streets, but this is what these kids relate to," Blakely said. "The reality is violence is not the thing to do. And they're coming to tell them that."