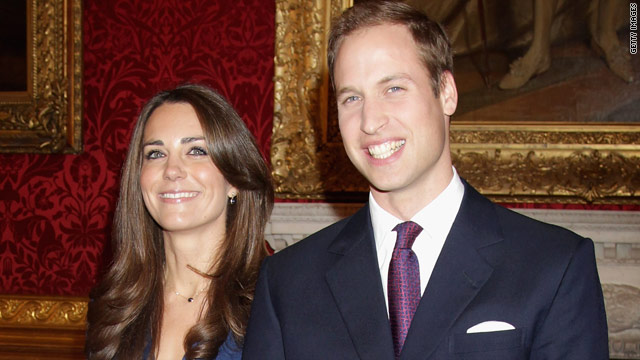 The engagement of Kate Middleton and Prince William is just one of the many British things over which Americans are obsessed.
STORY HIGHLIGHTS

Actually the British, and our fixation on them, are already here, judging by the fact that Americans couldn't get enough of them this week.

Be it consuming every scrap of information about the royal engagement of Prince William and Kate Middleton, the excitement over the Beatles on iTunes or the frenetic energy surrounding the soon-to-be-released latest "Harry Potter" film, we appear to be a nation of Anglophiles.

It makes sense since we have so much in common with Great Britain. Red, white and blue flag? Got it. Love of a good brew? Absolutely. Obsession with a sport called football? Check. Completely wrapped up in celebrity culture and can't get enough of stars? Done and done.

So why, after fighting so hard for our independence hundreds of years ago, are we still so enamored with the land of our forefathers' forefathers? Perhaps it all starts with the strong historical ties that bind.

Tracey Anne Cooper, a history professor at St. John's University in New York, seems to think so. "In some ways it's part of a desire to build back in your own history of where you come from," said Cooper, who also happens to be British. "American history doesn't start in 1492 or 1776. It has this longer back history, which was European."

Yes, long before we here in the States were importing prime British goods such as television shows like "The Office," we were the destination of choice for colonizers who firmly stamped their culture on America.

This week there was a complete and utter British invasion of the American shore. Some might even say it was the perfect British storm.

Having already graced the covers of Us Weekly and Star magazines before the official announcement, the recently engaged royal couple drew millions to CNN to share in their happy news and for a glimpse of the ring.

Another popular British export, "Harry Potter," has already seen the latest movie in its franchise sell out almost 2,000 theaters days before its release. According to Movietickets.com, "Harry Potter and the Deathly Hallows -- Part 1" has captured the No. 5 advance ticket seller of all-time title.

It was also a great week for the Fab Four from Liverpool. Within hours of the iTunes announcement, all the Beatles offerings (16 albums and one box set) had been catapulted on to the site's Top 50 albums chart.

But does that all mean we secretly, in our hearts, wish we were still Her Majesty's most loyal subjects? Not so fast, Cooper said.

"I think it's more the pageantry, the pomp and circumstance and the idea of a royal family rather than the desire for an actual monarchy," she said. "In a way, the Kennedy family was set up as sort of a pseudo-royal family, with this idea that there was this melodrama which was almost like a soap opera that you could plug in to and check out of and follow along this other family, which sort of parallels your own life."

Melanie Bromley, West Coast bureau chief for Us Weekly magazine, said that for a small island, Great Britain does it up big. Bromley, who is also British, said a recent cover story on the royal engagement did well for her publication because readers love a grand love story.

She said she believes the obsession starts across the pond and travels stateside, aided by the world being a much smaller place now thanks to the internet.

"[The British] have this kind of way of doing things in a huge way and a buzz is created around that," she said. "You've got 'The X Factor,' which is coming over here next year and is the biggest show in England, with 55 percent of the British population tuning in every Saturday."

She added, "I just think there is a way things are done which taps into the excitement of this very small, very isolated country where everyone gets obsessed with something and that just carries over."

And in the States, we can enjoy all of the guilty pleasures of British culture, including the pageantry and lavishness of royalty without any concern for the cost. Call it relaxation without taxation.

It's also easy to get submerged in a culture that shares our language, even if they do sound way cooler speaking it than Americans do.

"England is often one of the first destinations Americans visit when they travel abroad the first time," said Jonathan Thomas, co-creator of the Anglophile blog Anglotopia.net. "Their primary language is English; it's easy to travel around there, and it doesn't seem as foreign as say traveling to France or Spain."

Thomas said his site averages about 100,000 visitors a month, many of whom are seeking everything from travel tips to information about British television shows such as "Dr. Who." He said that while the U.S. has done a fine job of "cultivating our own form of royalty with our celebrities and the cult of personality which exists," our nation is still the new kid on the block in comparison with England.

"Sometimes I think we miss the permanence of something like having a queen," he said. "Presidents come and go and celebrities come and go, but the monarchy has been around forever it seems."

Us Weekly's Bromley said one of the things she finds so intriguing is that the obsession runs both ways -- Brits can't get enough of American pop culture, she said.

"I absolutely love American things, and in England we talk about 'Glee,' Angelina Jolie and Brad Pitt, Jennifer Aniston's love life and such," Bromley said. "We aren't talking as much about 'Harry Potter.' "