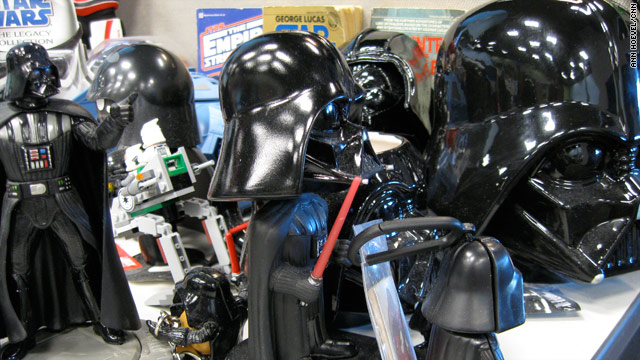 Editor's Note: On September 28, Lucasfilm Ltd. announced the "Star Wars" movie franchise would return to the big screen, this time in 3-D. CNN.com's search engine optimization expert Topher Kohan owns 12 different versions of "Star Wars" and has watched "Star Wars" and "Empire Strikes Back" over 500 times. As an avid "Star Wars" fan, the news that Lucasfilm was tinkering with the classic sci-fi series yet again didn't sit well with him -- to say the least. Here is his open letter to George Lucas and his fellow "Star Wars" fans.

I was sincerely disturbed when I found out you where planning on converting the "Star Wars" franchise to 3-D.

This is one of the worst ideas you've ever had about "Star Wars." And let's face it -- you've had some real stinkers: "The Star Wars Holiday Special" ring a bell?

I want to believe that you think this is a good move for the franchise but please consider what 3-D will do to the "Star Wars" legacy.

Sure, it seems like every other movie that gets released these days is 3-D -- some a lot better than others. As a wise man once said, "This is a dangerous time for you when you will be tempted by the dark side of the Force."

I am a huge fan of the "Star Wars" movies. Thank you for all the years of enjoyment you have given me.

When I sat in the theater in Petersburg, Virginia, in 1977 and saw "Star Wars" (I refuse to call it "A New Hope") I walked away with a vision of not only how good can triumph over evil but how seeing a movie could be the coolest thing to ever happen to me. I was there for "Empire" and "Jedi" and read everything I could about the movies. I had the toys and waited for the sequels you promised us.

When I heard that you where going to make prequels I was a little kid again.

There was little to love in "The Phantom Menace," and I was so ready to love it. I think this 3-D idea is doomed to be a repeat performance.

If you're going to capitalize on me -- and people like me -- at least let us get something out of it that rivals our dedication to the Jedi universe.

To be fair, I get that the legions of die-hard "Star Wars" fans are partially to blame for your latest twist of the knife. If we did not see episodes I - III in droves, you would have never thought of doing this.

And I'll confess, as mad as I am at you, I will be there at 12:01 am again to see the 3-D version of that torturous experience that is Jar Jar Binks. I know I'd regret it if I didn't. So would most, if not all, of the "Star Wars" fans I know.

iReport: The people behind "The People vs. George Lucas"

We will say how we hate it. We will say we won't go. But as it gets closer we will cave. The worst part is you know we will and that we still care about your creations.

You don't need to make them better. We already think they're perfect. If you need to expand, then give us the sequel.

Give us something that is new and not just an indulgent reworking of one of the greatest movie franchises ever.

I'm asking "Star Wars" fans to try to stop spending money on your rehashes. By now it's embarrassing how we act like starving dogs, happy with whatever "Star Wars" scrap we get.

For the sake of our collective, cherished memories, this must stop.

Thank you sir for your consideration, and: May the Force be with you!