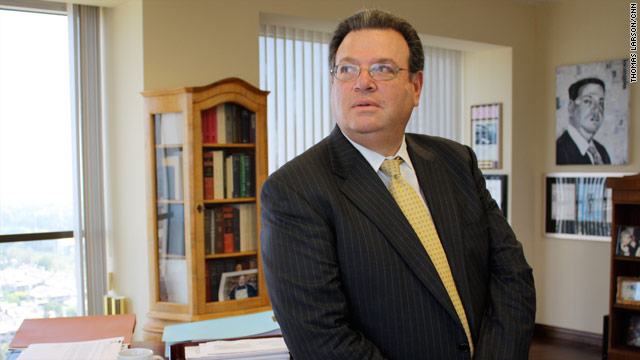 Attorney Marty Singer's 24th floor office overlooks some of the most expensive real estate on the planet.
STORY HIGHLIGHTS

The words strike terror in the hearts of many mainstream journalists, bloggers and tabloid editors around the world. It means life is about to become very unpleasant because of something they have written or said about someone famous.

A phone conversation can deflect a dreaded Singer letter.

"When Marty calls, you listen," TMZ creator Harvey Levin said. "I'm not scared of him at all. I respect him."

Celebrities beset by rumors of sex tapes (Britney Spears, Eric "McSteamy" Dane), false tabloid headlines about a "bum ticker" (Arnold Schwarzenegger) or bogus reports that they're seeing a divorce lawyer (Brad Pitt and Angelina Jolie) turn to Singer for the aggressive, headline-snuffing tactics that have earned him the moniker "Mad Dog Marty."

"My firm has filed more lawsuits against the media than any other firm," Singer said with pride as he sat down for an interview in a 24th floor Century City aerie with a jetliner view of some of the most expensive real estate in the country. Because of U.S. defamation laws that now tend to favor the media, many of those lawsuits are now filed in Europe.

My firm has filed more lawsuits against the media than any other firm.
--Martin Singer, attorney
RELATED TOPICS

Singer, who is 58, didn't set out to become the pit bull lawyer to the stars. He really wanted to be a tax attorney.

The son of a commercial artist, Martin Dori Singer grew up lower middle class in Brooklyn. He worked in a factory to pay his way through college and graduated from Brooklyn Law School in 1977. He came to California on a whim because he'd spent a few days there on his honeymoon and liked it.

"But the job market was not great," Singer said. He answered an ad in the Los Angeles Daily Journal, a legal newspaper, and joined a litigation firm that was prominent at the time. He worked there for three years, helping the tax attorney, and then learned the firm was closing.

Jay Lavely, the firm's head of litigation, took Singer aside and said, "I never want to be in a position again where someone tells me that I'm out of work," Singer recalled.

They founded Lavely & Singer in June 1980. Their first big celebrity case came nearly two years later. The late comedian Richard Pryor asked them to take on his business manager, who allegedly fleeced him of millions. They won, and the referrals kept on coming. Lavely & Singer is now one of Hollywood's go-to law firms.

And, while he might be feared by celebrity gossips, Singer does have a soft side.

TMZ's Levin said that while he and Singer might sometimes disagree, "it never gets personal." He decribed their dealings as "cordial."

Singer is almost never seen on television, and he doesn't initiate contact with the media, unless it's to correct what he considers to be defamatory information. His busiest gossip-deflecting days are Mondays and Fridays, he said.

He's currently representing besieged golfer Tiger Woods and actor Nicolas Cage, who settled a case with his business manager over the handling of his financial affairs.

Singer doesn't handle criminal cases and says he's branching out beyond Hollywood, taking on some cases for executives of Fortune 500 companies.

As one of Hollywood's longtime legal gladiators, Singer says it's getting harder to squelch rumors and win lawsuits in the internet age, even as celebrities keep tabs on what's being written about them by setting up Google alerts.

"The difference is the speed," Singer said. "I can't wait for the next day to respond. Now I'm given, literally, 15 minutes to respond. I have to be aggressive and to the point."

The reporting standards are changing, too, he said. "Most -- not all, but most -- online reporting is more reckless. They are not so concerned about getting it right."

And suing is not always an option. "Is your client going to wind up filing a lawsuit against someone who is operating a website? That just puts it out in the mainstream," Singer said. "It's a big decision."

Personal: Singer has been married for 35 years and has three grown children who are pursuing careers in the arts. He plays golf for fun, not to schmooze.

Quote: "Clients tell me, 'I don't want to be Lindsay Lohan.' No courthouse. No jail."