How to talk like a vampire, and anyone else 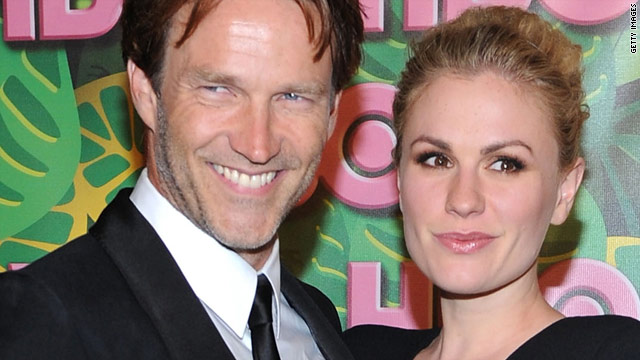 (CNN) -- "You are my miracle, Sookie. For the first time in 140 years, I felt something I thought had been lost to me forever. I love you."

Bill Compton's sexy, antiquated Southern drawl comes through loud and clear when he speaks these words: he says "miracle" as "mir-uh-kal," and drops the "r" in "years" and the "g" in "something" when he tells Sookie Stackhouse that he loves her in "True Blood," which just ended its third season.

But that's not how the show's leads Stephen Moyer and Anna Paquin, now married, speak in real life. Paquin comes from New Zealand. Moyer is British. Their speech is nothing like wide-eyed Southern waitress or the vampire of over 170 years from Louisiana.

How do they do it? Behind the scenes of many television shows and movies, dialect coaches are working with actors and actresses to perfect their speech patterns, getting them to sound as close to the director's vision as possible.

"We take the dialect and sing it, whisper it, make it part of the whole process," says Liz Himelstein, dialect coach in Los Angeles, California, who has worked with the cast of "True Blood" and has 20 years of experience in the film and theater industry.

The creative force behind "True Blood," Alan Ball, is from Georgia and writes in a Southern dialect, which also helps the actors get a feel for how things should sound, Himelstein said.

"It's as if we're reading a piece of music and if you follow his rhythm, you're going to be closer than you ever thought," she said.

Blog: From brain to language to accent

To get Moyer's character Bill Compton's accent right, Himelstein used proprietary recordings of older gentlemen from the South. His accent had to be different from other characters because he's lived through more than one century, she said.

Working on the show's pilot, Himelstein was impressed that all the actors seem to know already how to do voice warm-ups and how to pick up a new way of speaking, she said.

"There was such a joy in that room of everybody doing it together, which was so much fun, because everybody had to do an accent. It can be a lot of fun when everyone has to do it," she said.

Different people have different styles of learning accents, says Robert Easton, who began a movie acting career in 1945, but later turned to dialogue coaching as his primary occupation.

Some people have a natural "good ear," and can repeat what they hear simply by listening.

"Sometimes, as soon as an actor hears it, they're in it. It's as if it's another costume and they put it on, and it's very freeing," Himelstein said.

Others are more visual -- Easton has his own system of re-spelling words so that people can better pronounce them in the desired accent. These visual learners can also benefit from drawings of lip and tongue positions that produce specific sounds. Others are kinesthetic, needing to learn what to do in detailed physical terms, he said.

When it comes to the number of dialects, the winner for Easton's clients is likely John Saxon of "Enter the Dragon" and "A Nightmare on Elm Street" fame; who has learned 23 different ways of speaking from him, Easton said. The late Charlton Heston also came back many times.

Easton has been getting fewer new clients recently, but enjoys such repeats as Forest Whitaker. When Whitaker was filming "The Last King of Scotland" on location in Uganda and the script would change, he would call Easton at 3:30 a.m., still in character, asking for pronunciation help, Easton said.

Performers aren't the only ones who seek help with dialects. Easton has coached teachers, doctors and foreign businessmen with their speech.

"I can't tell them about their business, but they'll have their people write out a speech and then we'll practice it to try to get it to sound spontaneous," he said.

He's also coached attorneys who had been losing jury cases. A New Yorker who talked too fast learned to slow down and started winning his cases; an Oklahoman who spoke too slowly got training in speeding up his words, and started having more success in the courtroom.

How to learn a new accent

Himelstein believes anyone with sound hearing can learn to speak with any accent, although it does take discipline. Americans do tend to have more difficulty with the Slavic, British and Australian dialects, she said.

The first step for learning any accent is finding primary source material -- in other words, recordings of real people who come from the desired region of the world, or one-on-one conversations that you have yourself. For the movie "Dolores Claiborne," for example, Himelstein met with nurses at a hospital in Maine and recorded them speaking about their lives, their political views, their families and other personal speech that allowed actress Kathy Bates to develop a feel for how her character should speak. Himelstein also records interviews she sees on television if they might be useful.

If the role takes place in a different time, experts often try to interview older people from the region. For "Cold Mountain," Himelstein helped Nicole Kidman prepare for her role as a woman from the 1800s by interviewing a 95-year-old woman who talked about her girlhood.

If you can't travel, there are free resources available online. George Mason University's Speech Accent Archive has samples of people speaking the same English paragraph in hundreds of dialects from around the world, from oromo (Ethiopia) to khmer (Cambodia) to Creole. The International Dialects of English Archive also has a large collection that includes oral histories.

Then, you have to get specific about the sounds of the dialect you want to learn. Each language, and each dialect of each language, has a limited number of basic sounds out of which the words are built, Easton said. Listen to how every vowel changes; break it down and drill individual words from the script over and over, Himelstein said.

The education and social class of the character are extremely important when crafting an accent, Easton said. There's no one "British" dialect; people who come from expensive areas of London sound different than those who come from the working class neighborhoods like the East End and speak "cockney." For England specifically,The British Library's Archival Sound Recordings website has a wealth of samples from different counties.

For those playing characters who have foreign accents but speak in English, it's important to note the speech patterns of real people whose second language is English, Easton said.

If you don't have a particular sound in your own language, you tend to reach for the nearest sound that you do know, Easton said. If you're not used to the "th" sound, you might use "f" when vocal chords don't vibrate and "v" when they do. For instance, pay attention to how these words are different: "ether" vs. "either," and "thin" and "then." In other situations, "d" and "t" might replace the "th," such as in "mother."

If she's lucky, Himelstein will have a month to work with the performer before rehearsals begin -- but sometimes she only has two weeks. When she's on the set for a television show or movie, she can quietly whisper into the ear of a performer who accidentally stray from a character's accent.

When the final product is out, she's never completely satisfied, but still considers her field one of "joy."

"You must find joy in all of it, and getting back to the time when we as kids used to put on accents, and we were so free about it," she said. "And once you get into that kind of freedom, it's easy to learn."