Nerds and jocks getting along? 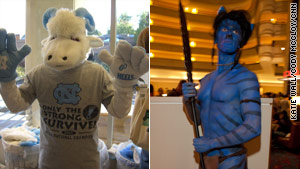 The inevitable collision of nerds and jocks in Atlanta seems to offer common ground.
STORY HIGHLIGHTS

(CNN) -- It has all the right ingredients for a tense situation: Scorching hot weather. Relentless humidity. Sidewalks, subways and hotels packed to capacity. Long lines. Nerds and jocks.

But instead of being a pressure cooker, downtown Atlanta, Georgia, is serving up a huge party.

Labor Day weekend finds the city of Atlanta host to several well-attended events, including Nascar, Georgia Tech's season opening football game, the Decatur Book Festival and Atlanta Black Gay Pride. The weekend's two largest events, DragonCon and the Chick-fil-A Kickoff Game, happen only a few blocks away from each other, essentially taking over the downtown area.

Event organizers and attendees readily admit that three years ago, the first pairing of DragonCon and the kickoff game was as an awkward, giggly mashup of Storm Troopers and face-painted alumni. But all are quick to point out that it didn't take long for fans to foster an enthusiastic weekend of unabashed celebration and mutual respect.

"It's kind of like the ultimate pop culture weekend," said Katie Wall, a digital marketing consultant. "Where else can you find a place full of sci-fi and fantasy fans next to beer-guzzling football fans, all decked out in their school colors? It's like everyone's in costume for the weekend.

"But I think at the end of the day it's just a lot of people getting excited about what they love and coming together to celebrate it with other people who love the same thing," she said. "I don't know that there's so much of a difference, except that we'll all be wearing Carolina Blue and they'll all be wearing costumes."

The University of North Carolina will be playing Louisiana State University in the big game.

Kris Harter, a chemist and DragonCon attendee, says it's not always easy for the two groups to get along, but there's enough room for everyone.

"I think they are as amicable as possible with each other," Harter said. She says that three years on, DragonCon attendees are more accepting of the football fans and are joining in during the buildup toward the game. "They're more willing to say 'Roll Tide!' or 'Go War Eagles!' or 'Geaux Tigers!' which you'll hear a lot of this weekend," she said.

"The truth is, most of DragonCon attendees have a college football preference. It's not the old style stereotype of someone who's reading comic books and avoiding sports or not caring about sports, it's someone who's reading comic books while they're watching sports. I've had a running e-mail chain for weeks with the chairman of DragonCon about ACC versus SEC," said DragonCon spokesman Dan Carroll.

"We've reached out to them this year to say, 'Hey, you have your parade, if you want to come down to Centennial Olympic Park [for the ESPN College Game Day broadcast prior to the Kickoff Game] let's get the groups together and see what happens here,'" Stokan said.

"I actually know they'll be getting a lot of takers," Carroll said. "We do have a group that's all ready to go right after the parade. A lot of people [will be] in costume, and we're going to be going over to ESPN, to their Game Zone area by the stadium, and just getting to meet some of the football fans."

Sometimes called "Comic Con's little brother," but fiercely defended by attendees as the country's most fan-oriented convention, DragonCon had more than 30,000 preregistered guests as of Thursday night, Carroll said. Celebrities on the Con circuit anticipate an attendance closer to 70,000 people this year, based on over-packed hotel rooms and local visitors.

"It's not intimate. It's not a small convention," Harter said.

Because it's so massive, DragonCon attendees need to prepare, Harter said. "First thing on my list, a good pair of shoes.

Harter suggests wearing a T-shirt with a nerdy quote on it (like one from "The Big Bang Theory" that says "Bazinga," or "See DOS run") or a costume. Bringing food can also be advantageous for long lines, she said.

This year the convention spans four of downtown's largest hotels. Sharing some of those packed rooms will be the close to 20,000 LSU and UNC fans in town for the Kickoff Game. Stokan said they are still selling tickets and hopes this year will be another sold-out game.