New Orleans, Louisiana (CNN) -- Waiting in a parked car in the Ninth Ward as the rain pounds down, I cannot help but think about the flood in the movie, "The Curious Case of Benjamin Button."

It's a natural, because I am only a stone's throw from where the levee broke, and I am here to meet the star of that movie, Brad Pitt, as the finale to our "Building Up America" tour.

The actor targeted this area some years ago with his Make It Right Foundation -- an ambitious plan to build up the shattered neighborhood with new, ecologically friendly, affordable houses, and then fill them with residents who had been driven out by Katrina.

When the rain backs off a bit, I hustle into one of the raised houses, where my TV crew is busy setting up lights on a covered upper deck. NBC is also there, but in a different area. I spend a few minutes chatting with Brian Williams. We've known each other for years and share a lot of friends, and it's always nice catching up.

Video: Back on Bourbon Street

Video: How vulnerable is the Gulf Coast?

After a while, he asks, "Who's going first on this?" I respond, "You are." He goes to get ready, and I look at the houses arrayed all around us. They are architectural marvels -- striking designs of unexpected angles, bright colors and green innovations: solar panels on the roofs, energy-saving appliances, rainwater collection systems.

They don't look like anything else you'll see in the Ninth Ward, but when Pitt finishes with Brian and comes up the stairs, no one is looking at the architecture.

He shakes my hand, flashes that famous smile, and his eyes twinkle (I'm no star chaser, but I swear, they really do). He takes a quick sip from the coffee cup he's carrying as we settle in to talk.

"You have set for yourself a very ambitious project in taking on a very difficult problem," I say. "Five years in, how do you think you're doing?"

"These houses here have exceeded my expectations," he says, looking across the neighborhood. "The goal here was how do you build affordable housing that's high-performance, and that is going to be strong enough to withstand the kind of weather that we're seeing down here. Things that drive the price up, we've got to get down." 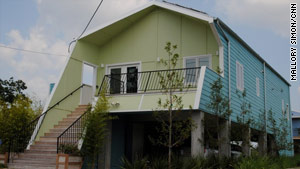 In New Orleans' Lower 9th Ward, where Katrina did much damage, Pitt's Make It Right nonprofit built this home.

Mindful of how such plans often go, I say, "I'm guessing your first units here cost a lot more than your later ones."

"Sure, but now we're down to dollar-for-dollar what it costs to build anything else here," Pitt says.

... every house ... was producing more energy than it was consuming. ... That's a game-changer.
--Brad Pitt
RELATED TOPICS

"And now every house you see here, last month, every one but one was producing more energy than it was consuming. That's big news. That's a game-changer. And there is no reason to build any other way now," Pitt says.

Pitt says he also wants to spread this idea beyond this neighborhood, looking into other areas in the U.S. and even abroad.

Donations from all over the country have fueled the first part of the project. Pitt acknowledges he hasn't made it very far on that next step.

"You know this neighborhood was built on the kindness of strangers," he says, quoting "A Streetcar Named Desire." "The old Desire public housing project stood not far from where we are. For this to go on, it has to be on the governmental level.

"They have to look at this and set new practices, and new [building] codes. But in the meantime, with more donations now, we could get into other parts of the city," he says. "These people are pioneers here, and they have built the greenest neighborhood in the world. And I see this as a template that will work in any climate, any condition."

Pitt's love for New Orleans dates back to when he shot "Interview with the Vampire," in the mid-1990s. But his excitement for this project is obvious -- enough so that I wonder if it is taking over as the central interest in his life.

We were told repeatedly by Pitt's handlers that he really doesn't like talking about his famous partner, Angelina Jolie, and their children. I wasn't here to ask about his movie career, but oddly enough, as we end our chat, both subjects come up.

I look out over the houses he's brought to this troubled part of town and ask, "Could you see yourself at any point giving up acting to do this?"

He pauses a moment, the way celebrities do when they encounter a question they have not been asked before.

"Um, sure," he says hesitantly; then, warming to the idea of giving up the grind of being a movie superstar, "I'm quite excited by this idea of building a future and the direction that we're going. I'm getting older anyway. I see doing that less and less."

I laugh. "You'll have to have something to pass your time."

"Oh, I've got plenty of things to pass my time," he says, and in a reference to the famous family brood, adds, "Six of them."