Comics still have a place at Comic-Con 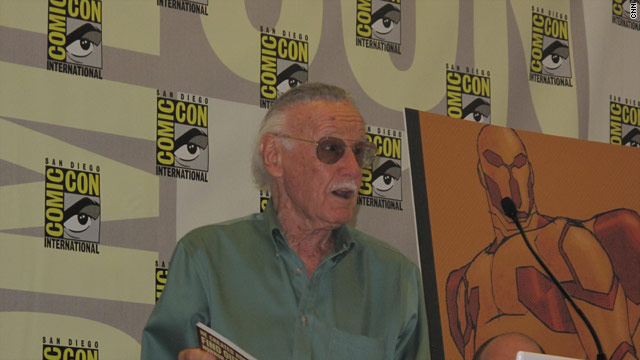 San Diego, California (CNN) -- While the latest movie releases might be the most visible part of the annual San Diego Comic-Con, the comic books themselves certainly haven't been lost in the shuffle.

The two titans of the industry, DC Comics and Marvel, have huge booths on the convention floor, and even less well-known publishers have some impressive displays.

Just about every one of them put out pieces of news at Comic-Con for their fanbase:

-- Marvel has "Ultimate Thor" and "Captain America: Man Out of Time" on the horizon (in time for the movie releases of both).

-- DC has a new "Batman" title, "Batman, Inc.," written by Grant Morrison, continuing his work on that character. (DC Comics is owned by Time Warner, which also owns CNN).

-- Vertigo's John Constantine character (as portrayed by Keanu Reeves in a movie a few years ago) will be getting married.

-- Dark Horse Comics (of "Hellboy" fame) will have a graphic novel by author Janet Evanovich and will adapt the Steven Spielberg series "Falling Skies" into comic book form.

-- IDW has already made a big splash with news of a "True Blood" series.

Boom! Studios, for its part, had Stan "The Man" Lee, probably the most famous comic book creator of all time, working with them on three new characters, "Soldier Zero," "Starborn" and "The Traveler."

Video: 'The Hoff' at Comic-Con

Video: Who's creating the buzz?

When asked about what Lee brought to these series, Boom!'s chief creative officer, Mark Waid, said, "What comics have become is like WWE wrestling matches, with good guys and bad guys, but the humanity gets lost." He said that Lee's characters always have to make a sacrifice to be a hero. "With [Lee], you get to embrace the best parts of humanity, instead of getting caught in a cynical world."

"Too often, writers think, 'I think that [readers] will like this,'" Lee said, emphasizing the importance of "writing from the heart." "If you do something you will like, chances are the readers will like it also."

Ask anyone here about the current state of comic books, and you'll get widely varying answers.

Marvel Comics' executive vice president and head of television, Jeph Loeb, a longtime comic book writer in his own right, said, "As an art form, it's still very similar to the way it was done back when those two 17-year-olds from Cleveland came up with Superman. Today, what you see is that they are better, in terms of the production values, certainly the kinds of stories that are being told." Loeb mentioned the wide variety of different publishers present at Comic-Con as an example.

Kevin Pereira, co-host of G4's "Attack of the Show," noted, "There's the independent alley here [at Comic-Con] and independent artists are still doing what they love and plying their wares."

For comic book writer, artist and now director Kaare Andrews, digital comics on devices like the iPad are one of the most exciting things to happen to comics in years, but, "There are too many events right now, too many crossover events."

Blair Butler, the comic book guru for G4, also has a positive view of comics today: "Every topic under the sun is being covered in comics," she said, pointing to "Fun Home," Alison Bechtel's autobiography about growing up in a funeral home. "There is so much diversity in the comic book world and it's just this wellspring of creative ideas."

Felicia Day, whose "The Guild" web series is also a comic book, would like to see more female writers writing superhero-oriented stories: "There's really a resurgence in women authors in the paranormal and romance section, but I'd love to see more strong woman voices in comics."

Writer-director Joss Whedon -- who has dabbled in comics on several occasions and will be directing "The Avengers" -- said, "Sometimes a trend gets squeezed out, between nihilism or zombie ... whatever the latest thing is, or rebooting something you already loved. I do feel like comics need to make a big step and blow it up in a big way like Warren Ellis did in the '90s."

Whether one thinks that comic books these days are great or have much room for improvement, there's no doubt that the massive event that is San Diego Comic-Con will ensure that this art form will continue to endure.

We're rallying iReporters at Comic-Con to get the story from the inside out and giving away limited-edition iReport Flip MinoHD video cameras!
The rules for Con costumes

Are you a beginner to Comic-Con? Learn the rules for all the cosplay you'll see and find out the backstory to all those colorful costumes.
Studios build early buzz at Comic-Con

San Diego's convention for comic book fans has evolved into a mammoth, sold-out event where hard-core fans can get early peeks at their favorite movies.
Comic-Con too 'mainstream'?

Some fans say Comic-Con -- the holy four-day weekend for geek culture -- has gone too mainstream. Others see nothing wrong with the trend.
Geek culture news