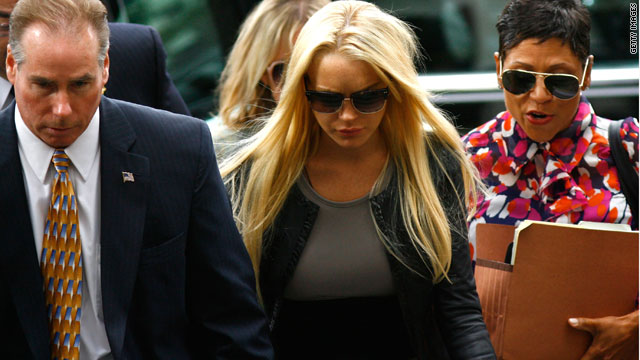 Los Angeles, California (CNN) -- Actress Lindsay Lohan showed little emotion as a deputy put her in handcuffs in a Beverly Hills, California, courtroom Tuesday morning to take her to jail to begin what it expected to be a two-week stay.

The actress, wearing a top that exposed part of her back, was surrounded by deputies and was quickly walked to a nearby side door labeled "secure area."

"We love you, Lindsay," her father, Michael Lohan, said as she disappeared.

Lohan was "cooperative" as she was booked into the Century Regional Detention Facility about an hour later, according to Los Angeles County Sheriff's spokesman Steve Whitmore.

Superior Court Judge Marsha Revel had ordered Lohan to report to the courtroom to begin serving a sentence for a probation violation.

Revel ordered that Lohan not be allowed to leave jail on a work-release or house-release program or with electronic monitoring during her sentence.

The judge said, however, she has no control over how much of the 90-day sentence Lohan will end up serving. The sheriff, who runs the jail, has the power to release prisoners early because of jail overcrowding.

Lohan should be released from jail after between 13 to 15 days "unless something unusual happens," Whitmore said. He said it was routine for inmates who qualify for good behavior credits in jail to only serve 25 percent of their sentence.

"I would like the transition to be sooner rather than later," she said.

The judge placed tight restrictions on what the public would be able to see at Tuesday's hearing.

While the world watched as Lohan, 24, broke down in tears at her sentencing July 6, the public was not able to see the actress handcuffed and taken into custody Tuesday.

Cameras stopped rolling when the judge announced that Lohan was to be taken into custody. The judge also ordered that photos of Lohan must be restricted to those that showed her at the counsel table.

The actress was ordered to serve 90 days in jail for missing alcohol counseling sessions in violation of her probation. She was also sentenced to spend 90 days in the drug and alcohol rehabilitation program after her jail term is completed.

Lohan's next court date will come a week after her release from jail, although if she is in a rehab program her lawyer can appear without her, the judge said.

Michael Lohan, whose estrangement from his daughter has been very public, sat two rows behind Lohan during the sentencing. His lawyer told reporters after the hearing that he was "devastated" that she was going to jail.

The actress will be "treated just as any other" inmate in the jail, although she will have her own cell and remain apart from the general inmate population, the sheriff's spokesman said.