Where are they now - A year after Michael Jackson's death 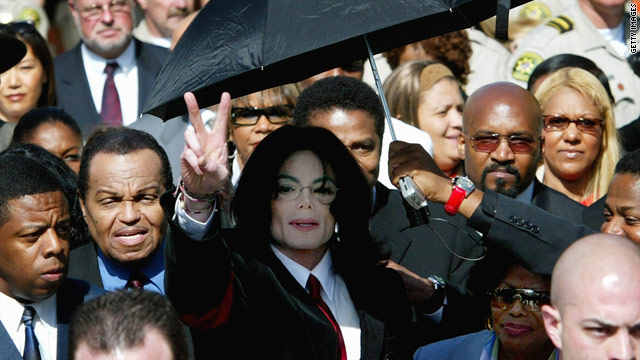 After Michael Jackson's death, there were many unanswered questions for those closest to the pop star.
STORY HIGHLIGHTS

Los Angeles, California (CNN) -- Michael Jackson's death instantly changed the lives of his family and friends. The weeks immediately after the pop icon died were chaotic, and many questions are still unanswered for those closest to Jackson.

The day their father died, Prince Michael, 13, Paris, 12, and Blanket, 8, moved in with their grandmother Katherine Jackson at the Encino, California, home where Michael once lived with his family.

The home is filled with memories of their father, including many photos of a young Michael Jackson. The theater room of the large house was converted into a classroom where they've been home-schooled for the past year.

The grassy yard of the Encino estate is often filled with Michael's kids playing ball with four cousins -- the sons of Jackson brothers Jermaine and Randy -- who have lived there the past year with their mother.

They share a computer with internet access, which resulted in fans getting a rare and candid look at Blanket's dancing, acting and light saber skills when several videos were uploaded to YouTube in April.

While Jackson kept his children shrouded in privacy during his life, they have appeared at a handful of public events to honor their father since his death.

Paris made the world cry at the end of a memorial for her father when she said, "Ever since I was born, daddy has been the best father you could ever imagine."

Paris and her older brother took the stage at the 2010 Grammy Awards to accept their father's lifetime achievement award.

The three children traveled to Gary, Indiana, this week for their first visit to their father's first home. They will take part in a tribute there, along with Katherine Jackson and their grandfather Joe Jackson.

Katherine Jackson's main focus since her son's death has been caring for his three children. A Los Angeles judge immediately gave her temporary custody, which became permanent after Debbie Rowe, the mother of the two oldest children, agreed not to challenge her.

Michael's 80-year-old mother waged a legal fight for several months for control of Jackson's estate, but gave up her probate challenge in October. She and Jackson's children are the main beneficiaries of the estate. For now, they are receiving an $86,000 monthly family allowance.

Katherine Jackson and her husband have attended every hearing in the criminal case against Dr. Conrad Murray, the physician who is charged with involuntary manslaughter in their son's death.

She has only recently begun speaking publicly about her son's death, giving a handful of media interviews. Katherine Jackson also posted a YouTube video this month announcing her support for a tribute to Michael Jackson to be held June 26 in Beverly Hills, California.

Although Katherine and Joe Jackson have been married for 61 years, they do not usually share a home.

In the weeks after Michael Jackson's death, Joe Jackson -- his children call him Joseph -- denied allegations that he physically abused his son during his Jackson 5 days.

"Never. Never have. And I -- and I raised him just like you would raise your kids, you know? But harm Michael, for what? I have no reason. That's my son. I loved him and I still love him," Jackson told CNN's "Larry King Live" in August.

Joe Jackson has been outspoken and active in raising questions about his son's death. Jackson has called for a more serious charge than involuntary manslaughter against Murray.

He recently filed a complaint with the California Medical Board against AEG, the company that was producing the comeback concerts. The complaint accused AEG of neglecting to provide the recommended medical equipment and a nurse who was supposed to assist Dr. Murray. Those measures could have prevented the singer's death or revived Jackson when he stopped breathing, according to the complaint.

Michael's father also plans to file a wrongful death lawsuit against Murray on Friday, the anniversary of his son's death.

Jackson, not mentioned in his son's 2002 will, has an ongoing legal challenge against the men named as executors in the document. The probate judge has ruled against him, but it is under appeal.

While Jackson, 80, receives a monthly Social Security check, he depended on financial support from his son. That ended with his son's death. He petitioned the probate court to award him $15,000 a month in support, but the request is still pending.

Jackson, who lives in Las Vegas, Nevada, has been promoting his vision of a Jackson family museum and entertainment center in Gary, Indiana.

Michael Jackson's five brothers and three sisters have, at times, come together as a family since his death. But, as with many large families, they each follow their own paths.

Brothers Jackie, Jermaine, Tito and Marlon appeared together on an A&E Network reality show last fall that followed their attempt to record and perform again as a musical group. The series ended after six episodes with no new songs and no public performances. Brother Randy chose not to take part in the show.

Jermaine Jackson has been the most visible publicly, traveling around the world to promote his own projects and Michael Jackson's legacy. He recently performed a tribute concert to his brother in Gambia.

Sister Janet has stayed busy with her acting and music career, which included roles in two Tyler Perry movies in the past year.

La Toya Jackson has been outspoken in her belief that Michael Jackson was the victim of a criminal conspiracy to kill him. She has attended each of Murray's court hearings.

Rebbie Jackson, the oldest of the Jackson siblings, recently resumed her singing career. However, she has mostly remained out of the spotlight.

Debbie Rowe is a former nurse who married Michael Jackson in 1996, gave birth to his two oldest children and then agreed to a divorce settlement in 1999. Prince Michael and Paris remained with their father.

In the weeks after Jackson's death, Rowe considered a legal challenge for custody of the children. She finally reached an agreement with Katherine Jackson that would allow her supervised visits with the children under guidelines to be recommended by a child psychologist. It is unclear if the children know Rowe is their mother.

Murray lost his only patient when Jackson died a year ago. It was several months before Murray resumed his medical practices in Houston, Texas, and Las Vegas, Nevada.

He never got paid the $150,000 monthly salary he was owed for the two months he was Jackson's personal physician while the pop star rehearsed in Los Angeles for his comeback concerts, Murray's lawyer said.

Murray was charged with involuntary manslaughter in Jackson's death in February. The judge refused to suspend his California medical license, although Murray cannot personally administer anesthesia on patients. The maximum sentence if convicted is four years in prison.

His preliminary hearing, which is expected to last at least a week, could begin in late September. A trial could be held next year.

Klein hinted in an interview that he may have been a sperm donor for Jackson's children. His lawyer unsuccessfully appeared at a probate hearing last summer to seek a role for Klein in the children's lives.

When Jackson died, he was nearly $500 million in debt, according to a source familiar with his estate who is not authorized to speak about financial matters. In the year since, the debt has been reduced to about $300 million, the source said. The remaining debt is "very manageable" considering the income flowing into the estate, the source said.

Sony Music, which recently signed a $250 million recording contact with Jackson's estate, said fans bought 31 million Jackson albums in the past year. Sony's film division also paid $60 million to produce the "This Is It" documentary that was a global blockbuster last year.

The estate also has a steady flow of cash from the rights to 250 Beatles songs that Jackson shares with Sony.

Merchandising rights, a Cirque du Soleil deal and a memorabilia tour have also brought in millions to the estate.

Jackson's estate is being administered by John Branca, an entertainment lawyer, and John McClain, a former music executive, who were named executors in the 2002 will. Los Angeles Superior Court Judge Mitchell Beckloff has not made a final ruling on who will have permanent control of the estate.