Farrah Fawcett's fight against cancer continues after her death 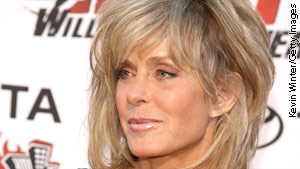 Los Angeles, California (CNN) -- Farrah Fawcett's death a year ago was the top story for only a few hours, quickly eclipsed by shocking news that Michael Jackson had died.

Jackson arrived in an ambulance at UCLA Medical Center three miles away and just three hours after Fawcett was pronounced dead at another hospital on June 25, 2009.

"It was such an odd coincidence that she and Michael Jackson should die just within hours of each other," Fawcett's closest friend, Alana Stewart, said. "It's just amazing that something like that could happen."

Fawcett might have "gotten a smile about the attention being off her," Stewart said

"I always had the sense that Farrah would kind of be getting a laugh out of that and saying 'Thank God, they're over there, finally. They're leaving me alone. The paparazzi, the reporters, the news cameras.'"

Stewart is not so understanding about the Academy Awards producers decision not to include Fawcett in their 2010 Oscar tribute to movie figures who had died.

"I was so angry," she said. "I called up the director of the Academy the next day and never thought that he would take my call, and he did take my call. And I said, 'Please tell me this was a horrible oversight.' And he said, 'No, there was a lot of discussion about it, and finally we felt that she was known more as a television actress.'"

Stewart pointed out that Fawcett acted in at least 16 movies. She was nominated for an Independent Spirit Award for her acting in "The Apostle" with Robert Duval. One of Fawcett's five Golden Globe nominations was for best actress in the film "Extremities."

"I can't imagine why they would have made that decision, and it was just really wrong," she said.

Fawcett's long battle with cancer was closely followed by fans, thanks in part to a camera carried by Stewart.

Fawcett asked Stewart to tape her doctor's visits at first as a way to remember what she was told, but she later decided to make it public. The documentary "Farrah's Story" aired just five weeks before her death.

The actress, whose hair and face made her a global icon, chose to not hide the ravages of her disease under makeup.

"She wanted it to be real, and she didn't want any window dressing on this battle with cancer," Stewart said.

She said to the doctor in Germany one day, 'You know, I'm glad I got cancer, because now I know I can make a difference.
--Alana Stewart, friend
RELATED TOPICS

"She felt like she could really make a difference and that she could help others and she could share her experience in this battle with cancer with other people who were also battling cancer," Stewart said.

Fawcett traveled to Germany to seek alternative cancer treatments not offered in the United States.

"She said to the doctor in Germany one day, 'You know, I'm glad I got cancer, because now I know I can make a difference,'" Stewart said.

"Some of the traditional things in the beginning of her treatment here really harmed her and really sucked the life out of her," Stewart said. "They were so debilitating."

Fawcett searched for "cutting edge" alternatives to the chemotherapy that was "like napalming your body," Stewart says.

Fawcett's story -- which Stewart also chronicled in her book "My Journey With Farrah" -- is about a woman fighting to live against mounting odds of a spreading cancer. It was a spirit that kept her alive, she said.

"The kind of cancer she had and the way it had spread, most people wouldn't have lived as long as she lived," Stewart said. "What's so incredible about her story is that she had this indomitable spirit and this incredible courage, and you know also her sense of humor."

It was a battle that she never thought she would lose, always expecting the miracle, Stewart said.

"She fought until the very last day," she said. "The doctors, the nurses, everyone around her said they had never seen someone fight so hard. And she did not want to give up. Not for one second. Not till the very end."

Stewart, who was at her hospital bedside when Fawcett died, will say little about her last moments.

"I just felt like that was a very personal, private time and I can say that she went very peacefully with just a few people around her," she said. "Ryan (O'Neal) was there, I was there, her friend Mela (Murphy) was there, the nurse and the doctor were there, and that was it."

The "Charlie's Angels" actress will be remembered on the anniversary of her death when her closest friends gather in Beverly Hills, California, Friday to cut the ribbon on the Farrah Fawcett Foundation's new headquarters.