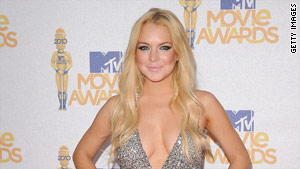 Lindsay Lohan is wanted on a bench warrant for "non-compliance" with an alcohol detection bracelet.
STORY HIGHLIGHTS

Los Angeles County Superior Court Judge Marsha Revel revoked Lohan's $100,000 bond, set the new, higher bond and issued a bench warrant for her arrest Tuesday afternoon because of "non-compliance" with the bracelet on her ankle, according to court spokesman Allan Parachini.

"Having just received the report, I am not in a position to speak to its accuracy or validity," attorney Shawn Chapman Holley told CNN. "However Ms. Lohan maintains that she has been in complete compliance with all of the terms of her probation and her bail. Bail has again been posted in Ms. Lohan's case and she will continue to comply with all of Judge Revel's orders."

The SCRAM bracelet samples perspiration on the skin every half hour to detect if the wearer has ingested alcohol, according to an online fact sheet posted by its maker, Alcohol Monitoring Systems Inc. The bracelet collects data and transmits it to a monitoring location.

Random drug testing was ordered because of previous evidence that Lohan was under the influence of cocaine, Revel said last month.

The actress used her Twitter account to dispute published reports Tuesday that the SCRAM alarm had been triggered while attending a party after Sunday's MTV Movie Awards.

"My scram wasn't set off," Lohan tweeted. "It's from the light up bracelet Johnny put on me."

She also tweeted that she was given a random drug test Monday.

Lohan was able to avoid being arrested on a bench warrant issued last month by the same judge when her bail was arranged as she made her way back to the United States from France.

It was Lohan's alleged failure to attend alcohol counseling classes, ordered after the Beverly Hills drunken driving conviction, that landed her back in court last month.

Lohan's failure to show up for court as ordered last month prompted the judge then to rule there was "probable cause to believe (Lohan) is in violation of probation." Her lawyer said Lohan was unable to catch a flight from France two days earlier because she had lost her passport at the Cannes Film Festival.

When she finally appeared in court several days later, the judge imposed the stricter conditions that included a prohibition against alcohol, the SCRAM bracelet and random drug testing.