Is Carrie Bradshaw a classic? 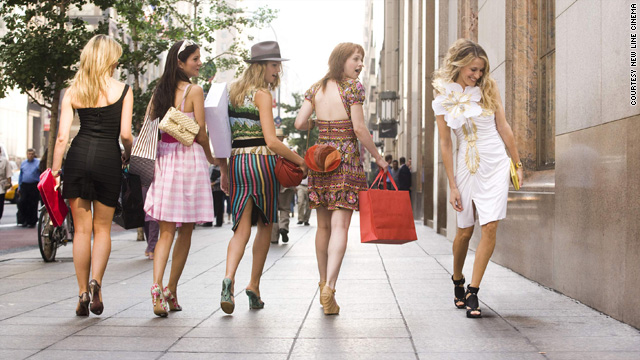 "Sex and the City" character Carrie Bradshaw has the potential to appeal to future generations, experts say.
STORY HIGHLIGHTS

(CNN) -- This spring, "Sex and the City's" Carrie Bradshaw will have nearly her entire life story recounted for audiences.

Fans can follow her trajectory from a high school senior in Candace Bushnell's new teen novel "The Carrie Diaries" to a 40-something married woman in the big-screen sequel, "Sex and the City 2."

Even with all of the detractors to Bradshaw's name that have popped up in the past decade -- she can be shallow, weak and oddly prude for a sex writer, not to mention a little self-absorbed -- audiences are still being served a heaping plate of Bradshaw. And judging by the anticipation for the second "Sex and the City" film, they're still eating it up. But will the next generation embrace Bradshaw with open arms like the women who came before them?

She added that while the depictions of Bradshaw we see this spring vary widely enough to make them nearly mutually exclusive -- one can read "The Carrie Diaries" without having seen the first "Sex and the City," movie, for example -- they do illustrate "that women of all ages really identify with something in Carrie Bradshaw."

The reason so many women can identify with Bradshaw, despite few being able to say they live in the same glamorous, exclusive world that the character orbits, is because Bradshaw can't be put in a box.

"She's an individual, she's independent, and she's wildly successful at her job, even though that's not talked about as much," Agrawal said. "She voices feelings -- whether it's about friends, men, career -- that women can really identify with and that they don't hear all the time because it's not necessarily Hollywood's usual vision of what being single, aspiring or being female is."

In that sense, argues culture critic and Salon.com contributor Mary Elizabeth Williams, Bradshaw has become a classic archetype in the tradition of Holly Golightly and Mary Tyler Moore.

"The same way that Jo March never goes away and Holly Golightly never goes away, there's this tradition of characters that are defiant, that are bold, who are independent and kind of bucking up against traditional expectations of what it means to be a nice girl," Williams said. "That's never going to go away, I don't think, because we live in a culture that has different expectations for women."

Indeed, when Ashley Sayeau, who has written extensively about "Sex and the City," was interviewing moviegoers outside of the London premiere of the movie in 2008, she noticed that the vast majority were young -- too young to have caught Bradshaw in her unedited glory on HBO from 1998 to 2004.

"They knew the show from watching DVDs, or they watched it with their mother," Sayeau said. "It spoke to them in terms of their relationships with men. It was one of the first real shows to talk about the complications of modern relationships: What compromises do you make in a new relationship, and which do you not make? And they also looked to the women for professional guidance; they were really inspired by Carrie's life as a writer and Sam's PR business."

This isn't surprising to Agrawal, who understands Bradshaw's critics but believes those flaws are exactly what will make her relatable for future generations.

"She makes bad decisions constantly. She doesn't necessarily treat people in her life perfectly all the time, but she's ultimately a good person, and it's kind of those flaws that make her human and make her somebody that women have identified with for the past 12 years and counting," Agrawal said.

What made Bradshaw and her cohorts (whom women often identify with just as much as Bradshaw) stand out is that they voiced the topics women may think about but don't often openly discuss.

"It was one of the only shows that talked about abortion or women's spending or what happens when you make more than your boyfriend and he doesn't like it," Sayeau pointed out.

Or, for example, when "Carrie was proposed to by what seemed like a perfect man, and she didn't want to get married to him," Agrawal proposed. "The idea of someone not wanting to get married isn't one you see very often. Charlotte found the perfect guy, and got married to him, and perfection wasn't what it was cracked up to be. She found the not-so-perfect guy, balding, a little bit pudgy who went around her house naked, and he was the one for her. Those are really rich and complicated story lines that were good to have out there and are very different from what else is out there."

As a result, she "wouldn't be surprised if in 10 years, [young women are] going back and watching old episodes and saying, 'that's what I'm dealing with right now. I'm having the same problem with my friends or my love life right now.' Unless we end up in a time where there are no women and living single in the city -- short of that, the power of Carrie will live on."

Toby Miller, chairman of the Department of Media and Cultural Studies at the University of California Riverside, does credit the show with doing something that has never been done before, but believes that within a continuously diversifying culture, Carrie and her friends need to step outside of their homogenous world if they want to remain relevant.

"When Candace Bushnell wrote those columns, obviously she was tapping into something significant. It was the first time in history where there was a group of middle-aged women who had disposable income, education and were on the prowl. It's been a massive hit both here in the U.S. and abroad," Miller said.

But to keep appealing to younger generations, "it needs to diversify," he said. "It's been a white girl's story for quite a bit, and obviously a lot of women of color have related to it and enjoy it, but I'm not sure a new set of story lines will take off the way the others did."

And, in the aftermath of a global economic crisis, does the 1998 Bradshaw, "who purchased things to heal heartbreak," even work post-2008?

Culture critic Williams believes it does. "I have two preteen daughters, and I see them already struggling with identity and what people think they're supposed to say; what good girls do and what ladies do. As long as you have that, the idea of somebody breaking free from that is always going to be appealing," she said.

Young girls will look to Bradshaw, "whether she's portrayed as a 17-year-old high school senior or a 45-year-old going off to Dubai, and still see that girl full of dreams who's going to change the world and have adventures," Williams added. "If you're a girl who wants adventure, that's always going to be an archetype."