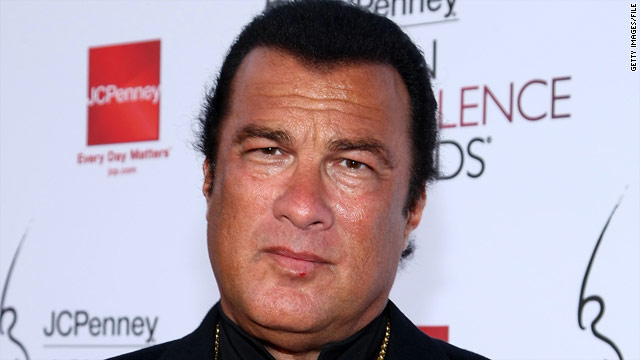 Los Angeles, California (CNN) -- A Louisiana sheriff halted production of Steven Seagal's reality TV show because of allegations made against the action movie actor in a sex abuse lawsuit.

A former model accused Seagal of using her as his "sex toy" after she was hired to be his assistant, a lawsuit filed this week said.

Seagal's lawyer called the sexual harassment suit "a complete fabrication" and said the woman was fired for using illegal drugs.

The civil suit put Jefferson Parish Sheriff Newell Normand in an awkward position since the A&E reality series "Steven Seagal: Lawman" is based on his department, where the actor is also a reserve sheriff's deputy.

"I informed them today that I did not think it would be in our best interest to continue filming at the present time," Normand said Wednesday.

The sheriff said he has reviewed the lawsuit and he will "take the allegations very seriously."

"I will treat Mr. Seagal no different than any other employee of the Jefferson Parish Sheriff's office," he said. "I am not moved one iota by virtue of his being a movie star of the fact that the national media has an interest in this case."

Normand, who previously described his relationship with Seagal as "very close," suggested there were questions about the alleged victim.

"I don't know if these allegations are true," he said. "I mean, as of yesterday, I think there's been revelations about the alleged victim." He did not elaborate on what those questions were.

Seagal will remain a reserve deputy chief and no criminal probe will be conducted unless the woman makes a statement with sheriff's investigators or the FBI, he said.

Her lawyer told CNN she did not contact local law enforcement agencies "in light of the fact that he'd been down there all that week shooting the TV show riding in a cop car with them."

"He is the sheriff's department," attorney William Waldo said.

Kayden Nguyen, 23, answered an online Craigslist ad for an executive assistant job at Seagal's production company in February and was soon on his private jet taking off from Los Angeles bound for New Orleans, the lawsuit filed in Los Angeles County Superior Court said.

"As the jet taxied down the runway, Mr. Seagal turned to Ms. Nguyen and said 'I'm a family man, and I live with my wife, but she wouldn't care if you were my lover,' " the suit. "Ms. Nguyen decided to take a wait and see attitude."

After Nguyen arrived in New Orleans "she learned that the job she was expected to perform had nothing to do with being an 'executive assistant,' " it said.

Seagal also kept "two young Russian 'attendants' on staff who were available for his sexual needs 24 hours a day, seven days a week," it said.

She was so "in fear for her personal safety that she left behind everything that she owned, including her car keys, her laptop, her clothes and hundreds of dollars worth of makeup," it said.

As support for the claims, the lawsuit said that Seagal has a "unique physiological reaction to sexual arousal," which Nguyen "can and will describe in great detail.

Celebrity lawyer Marty Singer, who represents Seagal, said the suit was a "ridiculous and absurd claim by a disgruntled ex-employee who was fired for using illegal narcotics."

Her claims "are a complete fabrication without a scintilla of truth," he said.