Lawyer: Jesse James is no neo-Nazi 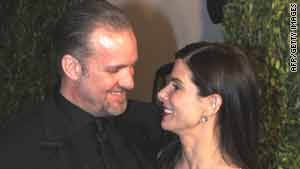 Los Angeles, California (CNN) -- Jesse James' Nazi hat was a gift from a Jewish mentor and does not make him a neo-Nazi, his lawyer said Wednesday.

James is at a treatment facility "to deal with personal issues" in a bid to save his marriage to actress Sandra Bullock, a spokeswoman for James said.

"He realized that this time was crucial to help himself, help his family and help save his marriage," she said.

A photo recently surfaced of James wearing the German Nazi hat as he raised his right arm in a salute. The hat may have been in poor taste, but it was given to James as a gag gift by his Jewish godfather, attorney Joe Yanny said.

Possessing Nazi memorabilia does not make someone a neo-Nazi, he said.

As evidence that James is no anti-Semite, Yanny said James lived for nearly a month in an Israeli kibbutz. His lawyer would not disclose what kind of treatment the famous motorcycle designer is seeking.

"I would request that his rights in regards to privacy and his medical matters be respected," said Yanny.

James has been the target of controversy and publicity since his separation with Bullock soon after she won a best actress Oscar earlier this month.

Yanny refused to talk about the condition of the James-Bullock marriage, which came under question when several women went public with claims they were involved with him.

"I understand people's desire in newsworthy stories, but I would hope that by now this wasn't such a newsworthy story such that his basic rights and privacy aren't continuously invaded in an improper manner," Yanny told CNN.

He said "99 percent" of what has published about James in recent weeks is untrue.