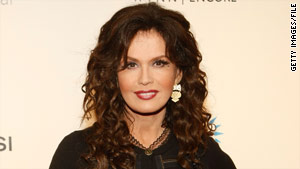 (CNN) -- The death of Marie Osmond's 18-year-old son has been classified as a suicide, police said Sunday.

A family spokesman on Saturday said that Michael Blosil had died.

Los Angeles Police Department spokeswoman Karen Rayner told CNN she could not release further information because the death is a Los Angeles County coroner's case. The coroner's office said the case was on "security hold" and nothing further would be released Sunday.

In a statement issued Saturday through a spokesman, Osmond said: "My family and I are devastated and in deep shock by the tragic loss of our dear Michael and ask that everyone respect our privacy during this difficult time."

Osmond's Web site describes her as "the proud mother of eight beautiful children who are always her greatest treasures."

Marie Osmond and her brother Donny hosted the national television variety show "The Donny & Marie Show" from 1976 to 1981.

Afterward, she had acting and singing careers. She recently competed in a season of "Dancing With the Stars."

In 2001, she wrote "Behind the Smile," about her experience with postpartum depression.