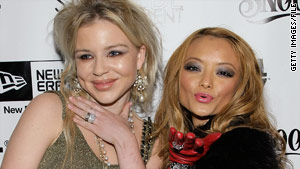 Johnson, 30, may have been dead as long as two days before her body was found January 4 by a friend who was letting her stay in a guest house, according to the autopsy report made public Thursday.

The socialite had "a long history of insulin-dependent diabetes mellitus that was poorly-controlled," the coroner said. She had been hospitalized at least twice because she did not take her insulin, the report said.

A housekeeper was the last person to see her alive, early January 2, the report said. She was found two days later when her friend returned from out of town, it said.

"They had recently gotten into a disagreement because the decedent had been misusing her insulin and taking large amounts of NyQuil to assist her in going to asleep," the coroner investigator said.

Family lawyer Robert Shapiro told investigators that she moved into the guest house of the family friend three weeks earlier.

"She had been estranged from her parents and because they had recently cut off her support she had to move out of her home," the investigator said.

A psychiatrist met with her less than a week before her death at the request of Shapiro "as part of the process in reuniting the decedent with her family," the report said.

The doctor "concluded that she was not suicidal."

"All of these findings indicate diabetic ketoacidosis" was the cause of death, the coroner found. The Mayo Clinic describes the condition as a serious complication of untreated diabetes.

Johnson was one of the great-great-granddaughters of Robert Wood Johnson, a co-founder of the pharmaceutical giant, and was the daughter of Woody Johnson, owner of the New York Jets professional football team.