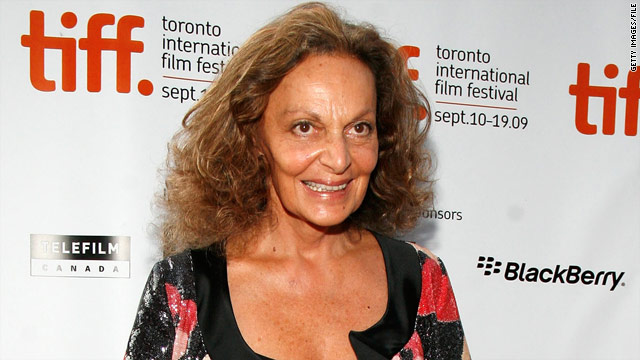 "My whole philosophy in life ... is to enjoy the woman that you are and to believe in it," says designer Diane von Furstenberg.
STORY HIGHLIGHTS

(CNN) -- Fashion legend Diane von Furstenberg says there should be no censorship of images in magazines and advertising -- despite calls in some countries for legislation to label fashion photographs that have been digitally retouched.

"The pictures, the snapshots that you take of your family -- you crop them, you take something away. That's just part of what we do automatically," von Furstenberg told CNN's Christiane Amanpour.

While von Furstenberg, who is president of the Council of Fashion Designers of America, does not believe such legislation is necessary, she said it's vital for the fashion industry to promote health as a vision of beauty.

"Beauty is health -- health, beauty," she added. "My whole philosophy in life and in my work and everything is to enjoy the woman that you are and to believe in it."

Furstenberg was responding to calls by a French lawmaker, Valerie Boyer, for legislation that would require all photographs that have been retouched to be labeled as such. French fashion watchers say that means 99 percent of all fashion photographs would carry a disclaimer, if the legislation is passed.

Boyer, who has two teenage daughters, says the fashion industry bombards people with images that may encourage anorexia.

"Today, we are forced to imitate bodies that do not exist, and this affects people, especially women," Boyer said.

Von Furstenberg, though, said the fashion industry is taking steps to discourage the use of stick-thin runway models. "We emphasize that we do not hire people who are clearly anorexic," she said.

He said retouching is not a new concept.

"This has existed way back into the 1950s. You know pictures you've seen of Marilyn Monroe have been retouched, albeit by hand in a different way."

Von Furstenberg pointed out that retouching has always happened, even in paintings.

Both von Furstenberg and Zee emphasized they would never allow retouching that went too far.

"I would never put a picture or print a picture in our magazine where we drastically altered anyone," von Furstenberg said.

"I would never drastically alter someone's body, change their hair color, move a neck, or whatever it is. It's really about cleaning up skin tones and looking beautiful," Zee said.

He added he would never feature anyone who is "deathly thin," because there's nothing glamorous about that.

The two also said the fashion industry is always changing, with von Furstenberg saying she believed there will be a return to models who look "a little bit more real."

Zee said there is a return to athletic bodies in fashion images. "Fashion is not about clothes," von Furstenberg said. "Fashion is a reflection of your time. And things change and mood changes, and you can't really understand why and nobody really decides it."