Graphic novels get the star treatment 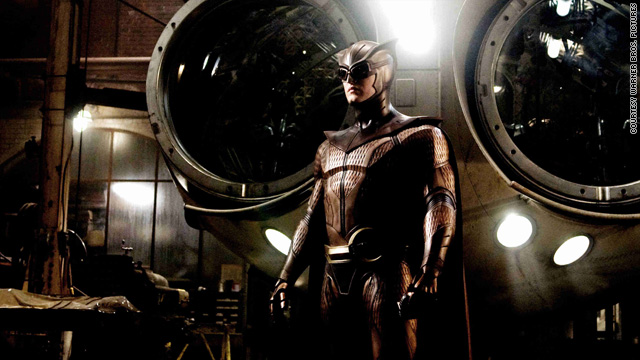 "The Watchmen" was one of the movies that helped push the graphic novel more into the mainstream.
STORY HIGHLIGHTS
RELATED TOPICS

With Zac Efron signed on for an adaptation of the spy graphic novel "Fire" and Blake Lively going brunette for her role as Carol Ferris in the upcoming "Green Lantern," Hollywood is still routinely mining the depths of graphic novels to find source materials for A-list stars -- and it looks like this relationship is just starting to bloom.

The romance between the film industry and graphic novels can be seen everywhere, from Disney's purchase of Marvel Comics -- which will supply them with an "endless" amount of potential films, experts said -- to independent publishers such as Top Shelf Productions pairing up with independent production companies to churn out their own flicks.

Top Shelf, said co-owner Chris Staros, "made it our mission to redeem graphic novels as a literary art form."

Staros said he expects several projects to result out of the deal over the next few years -- as well as increased exposure for Top Shelf.

"We value art and subtext, and that will always resonate. If we make a film, whether it has indie quirkiness or mass appeal, it'll have that," Staros said. But there's also the reality that "taking something to film brings it to a much wider audience, and that's one of the things we're hoping for."

Besides, "the key to movies is the key to any kind of story -- believable characters. And when you do a movie, [you're] able to infuse it with that extra dimension, like music, and bring it to life," Staros said.

The film industry's embrace of the graphic novel tightened after the unbelievable success of "Spider-Man" in 2002, said Stephen Weiner, author of "Faster than a Speeding Bullet: The Rise of the Graphic Novel" and director of the Maynard Public Library in Maynard, Massachusetts. When that movie came out, graphic novels were just beginning to gain traction as a form of literature that could be read outside of the house and past age 18.

And with "Spider-Man" fan Sam Raimi at the helm, the comic-based movie also became something more than the fare of adolescents. Raimi "was able to connect with your teenage boy and your 40-year-old guy who was able to see Spider-Man's problems as a metaphor for his own life," Weiner said.

"The days of being embarrassed to be caught reading a graphic novel is over," Weiner said, adding that "Hollywood had a big part to play. The really big success of 'Spider-Man' and 'X-Men' really changed it. They were able to take the mythical metaphors and give them human drama for people who didn't read comics."

Yet if "Spider-Man" hadn't been the blockbuster it was, earning more than $100 million at the box office in its first weekend, Weiner doubts Hollywood would even be interested in making film after film using this particular kind of source material.

"They're not in love with the graphic novel; they're in love with what they do for them," he said. "They invest a lot, and they wouldn't if they weren't getting the returns."

To date, another graphic novel-based film, "The Dark Knight," holds the crown for highest-grossing opening weekend at $158 million, followed by "Spider-Man 3" at $151 million.

As a result, "the stigma of using graphic novels has been lost," said Rich Johnston, creator of graphic novel and comic book gossip site BleedingCool.com. Now, "it's just another version of making films based on novels."

If not better, since the visuals are part of the storyline. "One of the biggest reasons why Hollywood loves graphic novels is because they have ready-made storyboards," Johnston said. "If it looks cool, that helps."

A decade ago, a studio wouldn't tout the fact that a movie was based on a graphic novel, Staros said. They've now become so mainstream that Hollywood readily puts the source material front and center when marketing a film, making the novel and its creator just as famous as the actors.

"Ten years ago, when I was at a bar, and I told someone that I publish graphic novels for a living, I would have to spend the next 15 minutes explaining what graphic novels are," he said. "And now when I say that, people say, 'Wow, do you know ['Dark Knight' writer] Frank Miller or ['Watchmen' writer] Alan Moore?' The conversation invariably turns to what graphic novels they've read or what movies they've seen based on comics."

And there's nothing like publicity to make a sale. "Watchmen," which was originally released in 1987, was boosted by the film to become the March, 2009 top-seller on the New York Times's list of best-selling soft cover graphic novels and Diamond Comic Distributors best-selling graphic novel of 2009. The novel was able to move units even though the movie version didn't do "Spider-Man" box office numbers by a long shot.

"A great movie only helps to sell the book, and even if it's not that great, all the publicity that the movie generates helps to sell it, so either way the book benefits from the film," Staros said.

And for wary studio executives, the graphic novel industry has become the safest way to make a potential blockbuster.

"All the decisions in Hollywood are made out fear," said screenwriter and the Undergraduate Chair of the Art Center College of Design's film department Ross LaManna, who recently wrote his own graphic novel, "Markus Fang." Even without a "Superman"-sized following, if a graphic novel has had any success at all, that alone makes it that much more worth the investment than an original idea, LaManna added.

"A lot of the graphic novels that are being sold don't have huge followings. These are characters and stories you've never heard of before, so it's not about chasing after a built-in audience," he said. "It's about tangibility. They think, 'You know what, this exists and succeeded at some level in another medium, so it must be safe.' "

It has become so accepted to use graphic novels as source material that pitching an idea without one has become the harder sell.

"It's become a way to sell an idea," Johnston said. "Getting it made into a film is where the real money is; the comic book is just the stepping stone."

LaManna is testament to that. When his partner Shannon Denton was at Paramount, working on another deal, "he was with an executive who asked what else he was working on," LaManna said. "Shannon started pitching him the idea, about Markus Fang."

The premise of the series is about an 18-year-old, trained by an agency to fight against an agency full of evildoers, except once he reaches the United States on his first assignment, his own agency is wiped out. Along with a few remaining fellow agents, Fang has to figure out how to put up the good fight without any intelligence or technology, making it up as he goes along.

LaManna recalled that when the Paramount executive heard all of this he became increasingly excited. Then, all of a sudden, his face fell.

"He goes, 'This is an original idea, isn't it?'" LaManna said. "Too bad. If this was a graphic novel, I could sell this upstairs.' "