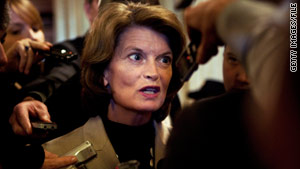 (CNN) -- A federal judge on Tuesday dismissed a lawsuit challenging Alaska Sen. Lisa Murkowski's write-in election victory last month, clearing the way for Murkowski to be sworn in for a second term next week.

State officials have scheduled a Thursday morning ceremony to sign the election certification, according to Sharon Leighow, spokeswoman for Gov. Sean Parnell. The certification will then be flown to Washington to be delivered to the Secretary of the Senate.

Shortly after the ruling, Alaska's lieutenant governor, Mead Treadwell, announced that the director of the Alaska Division of Elections had certified Murkowski as the winner, but his office later retracted that statement.

Murkowski was defeated in the Republican primary in August by Miller, a Tea Party-backed candidate. Murkowski then waged the write-in campaign in the general election in November to defeat Miller, who filed a lawsuit challenging the result.

In Alaska, Beistline's ruling "fully and finally resolved all claims raised by Mr. Miller and stated that they have absolutely no merit and no chance of success," said Scott Kendall, an attorney representing the Murkowski campaign.

Miller said he was "disappointed with the federal court's ruling," adding that he still believes his challenge is on solid constitutional ground.

"Thus, we are evaluating the ruling and determining what our next step should be," he said.

Earlier this month, the Alaska Supreme Court ruled that the Alaska Division of Elections conducted the November 2 general election according to state law. Miller had claimed the way some votes were counted violated state law.

In its ruling, the state Supreme Court affirmed an earlier Superior Court decision, saying: "There are no remaining issues raised by Miller that prevent this election from being certified."

After the election in November, Miller filed a challenge against the Division of Elections to ensure the state law, which calls for write-in votes to match the name of the candidate, was followed. He has argued that Alaska law does not allow the counting of misspelled names on write-in ballots.

In the original Superior Court decisions, a judge ruled that Miller did not provide proof of election official fraud, or that "there would be a sufficient change to the election results if these claims were true."