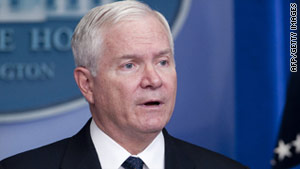 Defense Secretary Robert Gates is essentially telling gays and lesbians serving in the military not to come out yet.
STORY HIGHLIGHTS

(CNN) -- Despite President Barack Obama's signing of a law repealing the military's "don't ask, don't tell" policy, Defense Secretary Robert Gates sent a memo to troops warning them that it remains in effect until 60 days after the government certifies that the military is ready for implementation.

The Pentagon says it does not know how long the certification process may take.

In the meantime, Gates is essentially telling gays and lesbians serving in the military not to come out until 60 days after that determination is made.

"In order to prevent any confusion, I want to be perfectly clear: at this time, there are no new changes to any existing Department or Service policies," said the memo, released Thursday.

"Service members who alter their personal conduct during this period may face adverse consequences," Gates wrote.

When gay troops can come out
RELATED TOPICS

Before the ban is completely lifted, the president, the secretary of defense and the chairman of the Joint Chiefs of Staff will have to certify that the repeal can move ahead without negatively affecting unit cohesion and military readiness.

Since October, the military has dismissed at least eight service members for violations of the policy, according to Pentagon spokesman Col. David Lapan.

But Lapan said those dismissals had been approved prior to Oct. 21, when Gates tightened the rules about who in the Pentagon can dismiss a service member for violating the policy. Now, only the civilian service secretaries, in consultation with the Pentagon's top lawyer and head of personnel, can order dismissals. No new cases have resulted in dismissals since then.

Gates also said he now endorses all the recommendations of the Pentagon's working group on "don't ask, don't tell" as the road map for implementation. There will be no special bathroom or housing facilities to accommodate homosexuals, except in special cases. And troops who oppose serving with homosexuals will not be allowed to quit the military before their commitment is up.