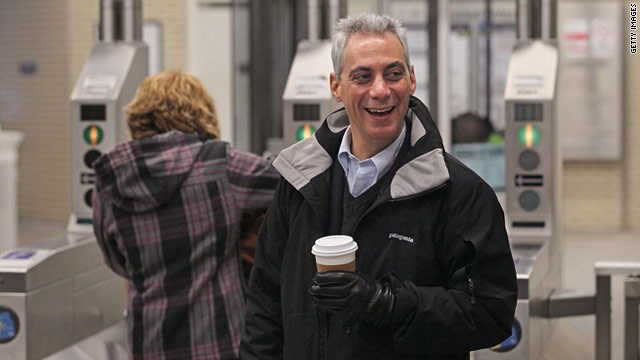 The Chicago Board of Elections decided Thursday that the former White House chief of staff should appear on the ballot in February's mayoral election, despite the fact that he has spent most of the last two years living in Washington.

Polls suggest Emanuel is far ahead of his rivals in the contest to succeed longtime Mayor Richard Daley.

The board's decision supports a Wednesday night ruling from Joseph Morris, a local attorney and official who conducted a three-day hearing earlier this month into challenges to Emanuel's residency. Morris concluded Emanuel should be allowed to appear on the ballot.

Emanuel testified for 12 hours at a December 15 hearing. More than 30 people filed legal challenges against Emanuel, claiming that he does not meet the necessary residency requirement to run for mayor.

Local law in Chicago states that a candidate for mayor must have lived in the city for the year leading up to the election. Emanuel spent most of 2009 and this year serving as President Barack Obama's chief of staff in Washington, before stepping down in October and returning to Chicago to run for mayor.

Opponents claimed that Emanuel abandoned city residency by renting out his home during his tenure working in the Obama White House. Emanuel responded by pointing out that he pays property taxes in Chicago, votes in the city, and that his car is licensed in the city.

Those facts, he claimed, prove his intent to remain a resident.

Morris's opinion "affirms what I have said all along -- that the only reason I left town was to serve President Obama and that I always intended to return," Emanuel said Thursday.

"Chicago voters should ultimately have the right to decide the election -- and to vote for me, or against me. And they deserve a swift conclusion to this process so that the campaign can focus on the challenges facing the city and the need for safe streets, strong schools, and stable city finances."

Despite the ruling of the three-member commission, Emanuel's opponents can still go to court to try and kick him off the ballot.

A poll released Thursday by the Chicago Retail Merchants Association and a Chicago Tribune/WGN survey released earlier this month both indicate Emanuel is far ahead of the other candidates in the race.

The winner of the February 22 election will succeed Daley, who announced in September that he would not seek a seventh term.