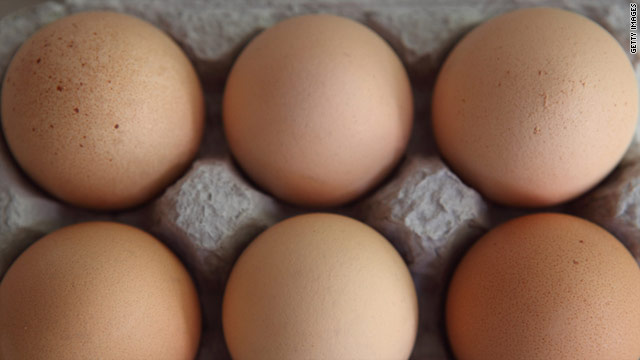 A recent outbreak of Salmonella enteritidis sickened more than 1,600 people and triggered a recall of more than a half-billion eggs.
STORY HIGHLIGHTS

Washington (CNN) -- A major food safety bill that passed the House and Senate earlier this year before stalling because of a procedural problem won final approval Tuesday and now goes to President Barack Obama to be signed into law.

The bill, designed to increase government inspections of the food supply in the wake of recent deadly foodborne disease outbreaks, originally passed with wide support in both chambers after originating in the Senate. However, it needed approval again because it violated a constitutional requirement that bills that raise revenue be initiated in the House.

The Senate passed its version of the Food Safety Modernization Act on Sunday, and the House voted 215-144 for final approval on Tuesday in one of the final sessions of the lame-duck Congress.

The bill, which represents the most sweeping overhaul of the food safety system since 1938, allows for greater governmental regulation of the U.S. food system -- currently in the national spotlight for numerous egg and produce recalls.

Among its provisions, the bill gives the federal Food and Drug Administration the authority to issue direct recalls of foods that are suspected to be tainted, rather than relying on individual producers to issue recalls voluntarily.

Currently, the FDA can negotiate with companies, but has no power to enact a mandatory recall.

It also requires food producers to develop written food safety plans, accessible by the government in case of emergency.

Under the measure, the secretary of Health and Human Services would be required to create a food tracing system that would quickly focus on the source of contamination should an outbreak occur. It also requires food importers to verify the safety of all imported foods to make sure they are in accordance with U.S. food safety guidelines.

In the Senate version, an amendment sponsored by Democratic Sen. Jon Tester of Montana exempted relatively small-scale producers that sell most of their food directly to consumers within their state or within a 275-mile radius of where it was produced.

Tester had called his amendment a "win for anyone who eats food," noting the local food processors still would be responsible for demonstrating that they had identified potential hazards and were implementing preventive controls to address the hazards, or demonstrating to the FDA that they were in compliance with state or local food safety laws.

CNN's Deirdre Walsh and Tom Cohen contributed to this report.