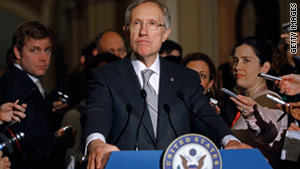 Washington (CNN) -- Senate debate on a new nuclear arms treaty with Russia intensified Monday, with Democratic supporters touting the backing of military leaders for the pact while Republican opponents used to Cold War terminology to portray it as a threat to national security.

The Senate met behind closed doors for more than two hours Monday to consider classified details of the Strategic Arms Reduction Treaty, known as New START, that resumes inspections of each countries nuclear arsenals while limiting each nation to 1,550 warheads and 700 launchers.

Later, Senate Democrats, joined by some Republicans, defeated three Republican amendments to the treaty. Those votes brought the number of proposed GOP changes voted down so far to five.

With a key procedural vote set for Tuesday and time winding down in the lame-duck session of Congress, the showdown over the pact took on a dramatic atmosphere with senators making floor speeches and statements infused with rhetorical flair.

After the closed session, Democratic Sen. John Kerry of Massachusetts, a leading proponent of the treaty, read reporters a letter to the Senate from Joint Chiefs Chairman Adm. Mike Mullen that expressed the full support of the military for quick ratification.

"This treaty has the full support of your uniformed military, and we all support its ratification," Kerry read from Mullen's letter. He repeated past assertions that Democrats have the votes necessary to approve the treaty, but continued lobbying behind the scenes indicated the outcome was far from certain.

Conservative Republicans said the treaty is insufficient and demanded more time to debate it than the remaining days of the current congressional session that ends in early January.

"I will not support subordinating U.S. national security to an untrustworthy partner and neither should the United States Senate," Shelby said.

However, Republican Sen. Scott Brown of Massachusetts said Monday he will support the treaty, joining veteran Sen. Richard Lugar of Indiana as the first two of what are expected to be several GOP backers.

President Barack Obama and Democratic leaders are pushing to get the agreement passed before the lame-duck session concludes and their majority in the Senate diminishes. With legislators eager to get home for Christmas, the session is expected to end when the holiday recess begins later this week.

Skeptical Senate Republicans, however, want to delay final consideration of the treaty until January, when they will have a stronger minority in the Senate to give them more leverage.

In a sign of the high stakes involved, Obama and other top administration officials, including Vice President Joe Biden and Secretary of State Hillary Clinton, all have been talking to senators in recent days to seek support for the treaty.

White House Press Secretary Robert Gibbs said Monday that Obama was available to answer questions about the pact as the first test vote approaches on Tuesday.

"We're happy to provide answers, either through the president" or another designated official, said Gibbs, who also challenged some of the Republican arguments against the pact. He called it "vexing" for some senators to both argue against specifics in the treaty and at the same time complain they haven't had time to read the text.

The Republican campaign against the treaty strengthened on Sunday, when Senate Minority Leader Mitch McConnell of Kentucky told CNN's "State of the Union" program that he opposes the START accord. Another conservative Republican, Sen. Jon Kyl of Arizona, also said Sunday he would oppose the treaty.

Republican senators are "uneasy" about the treaty, and trying to get a vote before Christmas is not the best way to "get the support of people like me," McConnell said.

The statements by McConnell and Kyl boosted the GOP's public opposition on the treaty that will need some Republican support to win approval.

Under Senate rules, the treaty requires a two-thirds majority of voting senators to pass, according to the office of Senate Majority Leader Harry Reid.

The Senate Democratic caucus has 58 members total, and 57 without Wyden, so Democrats need at least nine Republican votes for the treaty to pass.

If the vote gets delayed until the new Congress, as Republicans want, the number of GOP votes needed for approval would rise to at least 14 because the Democrats will have a diminished majority of 53 seats.

Gibbs repeated the White House's insistence that the treaty will win Senate approval in the lame-duck session, and he played down the significance of opposition announced by McConnell and Kyl.

"I had not talked to anyone here who had them as 'yes' votes," Gibbs said, adding that the senators' statements "didn't have any impact" on the expected overall vote tally.

McConnell's comments also prompted a response Sunday from Reid, D-Nevada, who issued a statement saying he was "deeply disappointed" at the Republican leader's opposition to the treaty.

Reid's statement noted that "respected Republican leaders" including former President George H.W. Bush and several former secretaries of state, as well as the current military leadership, all called for ratification.

In addition, Reid's statement said, the proposed treaty has been available since May and the Obama administration has answered questions from senators and taken steps to address concerns. For example, the administration has committed to increased spending on modernizing the U.S. nuclear arsenal at the request of Kyl, who had been leading the GOP opposition to the treaty.

Later Sunday, Reid filed a cloture motion -- a necessary procedural step to end debate and set up a vote.

"After months of consideration and five days of open and robust debate, it is time to move forward on a treaty that will help reverse nuclear proliferation and make it harder for terrorists to get their hands on a nuclear weapon. Every day we delay is another day we do not have inspectors on the ground in Russia monitoring their nuclear arsenal," Reid said in a statement.

However, Lugar -- the ranking Republican on the Senate panel and a supporter of the pact-- said on ABC's "This Week" program that he was uncertain a final vote would occur before the lame-duck session expires.

Lugar noted that the Senate still needs to debate Republican amendments to the treaty. Any change in the language or substance of the pact would require reopening negotiations with Russia, effectively killing the agreement.

The five Republican amendments defeated so far included adding a reference to tactical nuclear weapons, and a bid to remove from the preamble language recognizing a relationship between offensive and defensive weapons. While successful in defeating the amendments in all five cases, Democrats were several votes shy of the number they will need for final approval of the treaty.

On Monday, Kyl complained that Democratic opposition to any amendments eliminated the Senate's role as a deliberative body that can improve the treaty. Kerry responded that Democrats were defeating the Republican amendments because they lacked merit, not as part of a blanket strategy to prevent any changes to the pact.