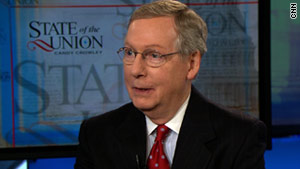 On the START treaty:

"I've decided I cannot support the treaty. I think the verification provisions are inadequate. And I do worry about the missile defense implications of it. ... I think if they'd taken more time with this -- rushing it right before Christmas, it strikes me as trying to jam us." -- Senate Minority Leader Mitch McConnell, CNN's "State of the Union"

"This treaty needs to be fixed. And we are not going to have the time to do that in the bifurcated way or trifurcated way that we're dealing with it here, with other issues being parachuted in all the time." -- Senate Minority Whip Jon Kyl, "Fox News Sunday"

"I believe it will pass, and I believe there will be a vote." -- Democratic Sen. John Kerry, ABC's "This Week"

"Several Republicans will support it, and I join the chairman in believing that there are the votes there. The problem is really getting to that final vote." -- Republican Sen. Richard Lugar, "This Week"

"This has been on the Senate calendar. People can study this. And if there's serious amendments that are being offered, fine. We can dispose of them. We've got many, many days between now and the end of the year. It's an important treaty. And it should not be sidetracked." -- Democratic Sen. Carl Levin, CBS's "Face the Nation"

"So there's been no real serious debate on START. With 50 amendments left, I don't think you can have a serious debate between now and January 4th. Given the process and the substance, there's a real hurdle there." -- Republican Sen. Lindsey Graham, "Face the Nation"

On the passage of the "don't ask, don't tell" repeal:

Getting to know General Richard Myers

"Each political generation has very few, but a few, opportunities to extend justice in America. That was our chance (Saturday) in repealing 'don't ask, don't tell.' And I am proud that my political party and eight really strong and courageous Republicans stood up and said, 'We'll join you.' This should be bipartisan." -- Senate Majority Whip Dick Durbin, "Fox News Sunday"

"I look at those who are on the -- who have been surveyed relating to the combat fighting, the units on the ground, not the guy sitting behind a desk here in Washington, but the guys on the ground, and they say this could cost lives." -- Kyl, "Fox News Sunday"

"I believe it fulfills an enormous promise of equality in our country. It's an historic day." -- Kerry, "This Week"

"I was influenced by those who are in combat presently in Afghanistan and the testimony of the Marine commandant that the adjustment that would be required by this is one that really ought not be (taking) place." -- Lugar, "This Week"

On the health care law:

"I'm hoping we will receive from the House of Representatives a full repeal of 'Obamacare.' It will be hard to get that through the Senate, but we will be working to try to get a vote on that and hope that among those who have had maybe second thoughts in the Senate, including the 23 Democrats who are up for re-election in '12, there will be some openness to revisiting what I think was the single worst piece of legislation in my time in the Senate." -- McConnell, "State of the Union"

"This legal case is not about the underlying policy. It's about whether or not, when you adopt a policy, can you do it in a way that's unconstitutional? And the answer is clearly, clearly no." -- Republican Gov. Bob McDonnell of Virginia, "Fox News Sunday"

On the 9/11 first responders bill:

"These first responders literally risked their lives when they went to ground zero. They came from all over the United States. And now many of them are struggling with health problems that are clearly directly related to that experience. To turn our backs on these brave people is the wrong thing to do. Will it cost money? Yes. Is it the right thing to do? Yes. We've got to find a way to fund it that's acceptable to Republicans and Democrats." -- Durbin, "Fox News Sunday"

"I think the first thing Republicans will ask is, do we have a chance to fix any problems that may exist with it? And it's a lot of money, and so I -- my early response is that I am skeptical about that bill." -- Kyl, "Fox News Sunday"

On extending the Bush-era tax cuts for all income levels:

"The fact that the Republican leader of the Senate would like a Republican president a couple years from now shouldn't be particularly surprising. What the American people are interested in, of course, is what we're going to do between now and then. And I think we demonstrated on the tax package there are some business we can do. And the president's willing to come and adopt positions that, frankly, I and my members hold anyway; why would we say no?" -- McConnell, "State of the Union"

"So any party or any person who decides to spend the next two years just tearing things apart and trying not to move America forward, I think they do it at their own peril." -- Democratic Sen. Amy Klobuchar, "Face the Nation"

"We're at 13% in the eyes of the American people. We have to ask ourselves, how does that happen? And who are the 13%, and what do they like? If we don't recognize that about ourselves and get this body in better standing with the American people, nothing is possible. I'm an optimist. I think we can change things, but it's going to take sacrifice and political commitment I haven't seen in a long time." -- Graham, "Face the Nation"

On where the U.S. stands in Afghanistan:

"Well, the one thing I've never been accused of is not being straight. We are making progress. Are we making sufficient progress, fast enough? The answer remains to be seen." -- Biden, "Meet the Press"

On U.S. relations with Pakistan:

"I believe we ought to be considering to do more for Pakistan, including on the economic front, but it has to be very much contingent with timelines in terms of what they will do. Because we have been positively engaging in the hope that they would change. That has not worked." -- Zalmay Khalilzad, former U.S. ambassador to Afghanistan, "State of the Union"

"I agree with the ambassador that we have got to continue to keep pressure of a sort on the Pakistani government to do things that would be helpful to ourselves and to them and the Afghans and the region. And maybe we can play a role -- a larger role in the region." -- William Fallon, retired admiral and former U.S. Centcom commander, "State of the Union"

On the danger North Korea poses:

"I think this is a lot of bluster on the North's part. And so, I mean, it depends in part on the Republic of Korea's reaction, but given the stakes and given how tragic any incident could be or further escalation, I think it's a hot spot, but I don't think there's a real worry of it breaking further." -- Retired Gen. Richard Myers, former Joints Chiefs chairman, "State of the Union"